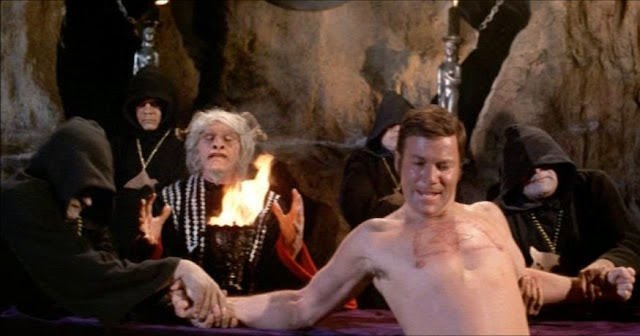 Not until the debut of 2004's LOST would I encounter a script so completely disinterested in the principle of exposition as that of THE DEVIL'S RAIN. And since director Robert Fuest seems to have been no more than a hired gun on the set, the blame falls squarely on the shoulders of the script's three writers, two of whom have no other credits on IMDB while the third has about six-seven other citations. To be sure, player Ernest Borgnine has alleged that he never got paid for the film because it had been financed with Mafia money. This may also mean that the script was chosen for its badness, so that it would lose money and so end up on someone's books as a tax write-off.

That said, before the production company purchased the script, they must have had some notion of being able to deliver to distributors something to justify the name: that of a Satanic rainfall that will dissolve anyone it lands upon. This might mean that someone consulted with makeup and/or FX people before greenlighting the movie, and at least promising a lot of well-known actors that they'd be paid. Thus the cast includes, in addition to Borgnine, Eddie Albert, Ida Lupino, William Shatner, Keenan Wynn, and Tom Skerritt, as well as a then-unknown John Travolta. In addition, celebrity Satanist Anton LaVey had a small role, but was certainly hired so that the filmmakers could ballyhoo having hired LaVey as a consultant on matters devilish. I suppose if you're going to orchestrate a cinematic flop, you have to project the illusion of really trying to make money.

The script drops the viewer in the middle of some incoherent struggle between a group of Satanists, led by Jonathan Corbis (Borgnine) and a small family, the Prestons, whose ancestors had bad blood with the ancestor of Corbis (or maybe Corbis himself) back in Puritan times. Lupino plays the matriarch of Clan Preston while William Shatner and Tom Skerritt play her sons Mark and Tom. The first two are seen being pursued by the occult vengeance of Corbis because they've stolen a ledger full of names of people who have signed over their souls to the Devil. Brother Tom only comes on the scene later and I for one was never sure if he was complicit in the theft. The Preston patriarch is also said to have been in on the book-thievery, but he is apparently the first victim of the Devil's Rain, a rainfall that descends capriciously from the desert skies and turns Preston into a gooey putrescence. (Even this simple plot-point is rendered nonsensical because Mrs. Preston claims that the oozing horror isn't really her hubby, but the script never comes back to this subject.)

Mark leaves his mother alone for a few minutes in their house, and somehow that's enough time for sly Satanists to invade the building, half-slaughter an old retainer and bear Mama Preston away. Mark hides the stolen book and drives out to a ghost town to confront Corbis, possibly to make a deal. Instead Corbis's followers overpower Mark and "Captain Kirk" spends the rest of the film being tortured or hypnotically enthralled by the Satanists. One addition to the flock is a lovely girl named Lilith (HEE HAW's Lisa Todd), who makes up to Mark, only to transform into Mark's now blinded mother, a convert to the demonic cause.

Other plot-points are cast out haphazardly. Tom Preston, his psychic girlfriend, and psychic researcher Dr. Richards (Albert) drive out to the area where Tom's relations disappeared. After many boring scenes where not much happens, Tom and friends find out that the magic through which Corbis manifests the Devil's Rain is a glass vessel with damned spirits swirling around in it. For some reason Corbis needs both the bottle and the ledger to secure his power, though it''s not even clear what one has to do with the other. Eventually, through the intervention of Tom, Richards and a briefly recovered Mark, the vessel is smashed. I guess that means that the released souls then unleash their power and destroy Corbis and the Satanists with their "acid rain"-- but not completely, since that ole debbil finds a way to survive.

I'll give the scripters a couple of points for the originality of the Rain itself. In the story of Noah we do find one very big destructive rain, but it doesn't make people dissolve into a primordial ooze, like something out of Arthur Machen. Rain IMO is more often used to suggest redemption, the washing away of sins, and there are no major Satanic connotations to any sort of downpours. But at least the basic idea is memorable, if not really mythic. Despite all the acting experience on the screen, most of the players just do what's required of them and no more, but the movie gets another point just for Borgnine's bravura performance, using this black-hearted character to play against the sort of upbeat roles for which he was predominantly known, like Quentin McHale and the protagonist of MARTY.

Posted by Gene Phillips at 2:55 PM
Email ThisBlogThis!Share to TwitterShare to FacebookShare to Pinterest
Labels: the marvelous