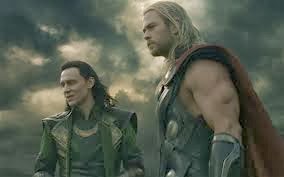 I suppose that in terms of plot coherence THOR: THE DARK WORLD (hence just DARK WORLD) isn't really any better than the 2011 THOR, which I castigated for its murky motivations and political correctness.  But DARK WORLD is a far more entertaining film than its predecessor if one doesn't obsess over the plot-points.  Further, DARK WORLD comes much closer to emulating the look of the great fantasy-films.  I mean, the central palace in Asgard still looks like nothing more than a gigantic pipe organ... 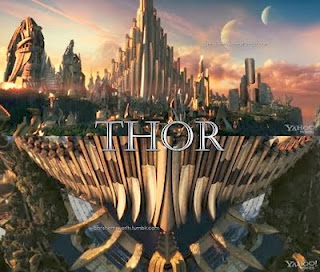 ...but at least there are enough scenes set in Asgard that the place looks like something people might *live* in.  The design of Asgard is nothing special, and looks derivative from the Peter Jackson LORD OF THE RINGS films, but it communicated a good fantasy-vibe nonetheless.  The costumes, which I also praised in the first film, remain a strong point.  But the film's greatest improvement is to impart a Norse *ethos* to Thor's home, so that it seems a credible place for heavily-armed warriors-- including Thor and Loki's war-maiden mother Frigga-- might disport themselves.

I have not re-read the Walt Simonson comics-epic on which DARK WORLD is very roughly based.  Simonson's storyline introduced the "dark elf" Malekith, who sought to bring about an apocalyptic catastrophe, just as his cinematic counterpart does. However, I recall Simonson's Malekith as a malevolent master schemer, almost as entertaining as perennial Thor-villain Loki. DARK WORLD's Malekith is in comparison a one-note figure.  The script throws in a few portentous phrases about how Malekith hails from the unformed chaos-world that preceded the existing cosmos of the "Nine Worlds," and this chaos that Malekith wishes to bring back is presumably the "dark world" of the title.  But a few dimestore myth-quotations, probably culled from some familiar translated work like the "Elder Edda," are not enough to make Malekith a memorable villain.  The audience gets that he's pissed to have the world of light succeed the world of darkness, and that's about it.  Christopher Eccleston attempts to give Malekith a frosty, malefic attitude, but it's clear that the scriptwriters weren't interesting in the character as anything but a plot-device.

But this time there's a good reason for this bit of negligence: that of placing the relationship of noble Thor (Chris Hemsworth) and conniving Loki (Tom Hiddleston) on center-stage.  DARK WORLD begins a year or more after the events of THE AVENGERS, during which time Thor and his warrior-companions have been traveling through the Nine Realms, subduing what one assumes are unjustified rebellions against Asgard's authority.  Loki has been locked away in a high-tech prison, given succor only by his adoptive mother Frigga, though he professes not to need her attentions.  Meanwhile a new threat appears on Earth: a super-weapon called "the Aether" which the Dark Elves created to hurl "cosmos" back into "chaos."  A prefatory opening establishes that during a war between the Dark Elves and the Asgardians-- the latter party led by the father of Odin-- the Asgardians wrest the device from their foes.  Somehow the device ends up on Earth, and in 2013 starts emitting various freaky phenomena, like creating anti-gravity and dimensional portals.  This leads super-scientist/Thor-girlfriend Jane Foster (Natalie Portman), her intern Darcy (Kat Dennings) and her intern's intern to investigate the site of the weird stuff, not long before Thor himself shows up.  In addition to some romantic tensions between Thor and Jane-- the guy did leave without explanation for over a year-- Jane is possessed by the Aether, a power that will destroy her even if it isn't used to destroy the universe.

Whereas Thor was the "duck out of water" in the first film, Jane then gets that honor in DARK WORLD, since Thor must take her to Asgard for possible treatment.  This prompts the Dark Elves to attack Asgard to regain the Aether.  Following the repulsion of the first assault,, Odin digs in his heels, defying Malekith to strike again.  Thor enlists Loki to spirit Jane out of Asgard in order to seek out Malekith.  The gambit is partly successful in that Malekith removes the Aether from Jane, but Thor and Loki are unable to prevent the Dark Elf and his goon squad from departing with their treasure.  Loki pays-- or appears to pay-- the ultimate price for helping his brother, while Malekith is poised to oblierate the universe once "the stars are right," as the cliche goes.  The last quarter of the film is dominated by Earth-based action, as Thor goes it almost alone against Malekith's forces. He's aided only by Jane and her friends, who have whipped up some ill-defined portal-manipulating gizmos, whose use adds to the frenetic action of the climax.  Inevitably the apocalypse is postponed and all is right with the world-- apart from the hearkenings of the next few plot-developments of other Marvel movies, not only for another THOR but also for the forthcoming GUARDIANS OF THE GALAXY flick.

This quick summary does nothing to convey the film's best asset: its humor.  Without the character-based jokes-- stronger here than in the first film because there's some history to play with-- the fast-paced action might have worn me out.  Kat Dennings' Darcy, who barely had two quips worth rubbing together in the first film, gets the lion's share of the funny lines, probably a consequence of the fame she gained from her CBS sitcom TWO BROKE GIRLS, which enjoyed breakout success in the fall after the original THOR's debut.  But other characters get a fair share.  Hiddleston's witty, charming Loki has his expected moments, but even the sobersided Thor gets in a few shots.  In contrast to my feelings towards the stodgy original, I find myself looking forward to at least one more episode in the Thor saga.

Posted by Gene Phillips at 3:36 PM
Email ThisBlogThis!Share to TwitterShare to FacebookShare to Pinterest
Labels: combative adventures, the marvelous