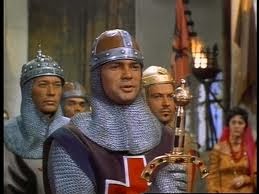 
Up for consideration this time are works associated with two of the most important names in 1950's metaphenomenal cinema: writer/director/producer Bert I. Gordon and writer/director Jack Arnold.  In the latter case Arnold functions largely as a "hired gun," but in the former, Bert I. Gordon was fully in charge of 1962's THE MAGIC SWORD.  The results, unhappily, were not as some of Gordon's other films reviewed here, like THE CYCLOPS and VILLAGE OF THE GIANTS.

SWORD's script is credited to noir-film specialist Bernard Schoenfeld, whose only other metaphenomenal film was the more celebrated SPACE CHILDREN (directed, incidentally, by Jack Arnold).  SWORD has a fairly winsome setup. George (Gary Lockwood), a young would-be knight, is born to a noble family but is raised to manhood by benign witch Sybill (Estelle Winwood).  He wishes to rescue Princess Helene, his "love at first sight," from the evil wizard Lodac (Basil Rathbone).  Lodac's motives are a little more familial than most evil wizards; he wants to feed Helene to a dragon because the king of the land burned his sister when she was the same age as Helene-- implicitly because Lodac's sister was genuinely guilty of witchcraft, though no one dwells on this point.  We later learn that Lodac has been feeding other maidens to his dragon, so Schoenfeld may have been aware of the sacrificial aspects of maiden-and-dragon myths in general, and of the St. George legend specifically-- on which SWORD is very nominally based.

Lodac has an ally in court: the nasty Sir Branton.  Branton has custody of a magic ring which Lodac desires, so the magician agrees to let Branton rescue Helene in exchange for the ring, so that Branton will then receive both Helene and the usual reward of half of her father's kingdom.  Branton's plan is complicated when George shows up to join the rescue party, along with six other noble knights, who were frozen in Sybil's cave and whom George thawed out to serve as his retinue.  Lodac unleashes seven curses to kill off the seven unwanted knights before they can reach the wizard's castle.  One by one George's brother-knights-- who are from nations other than George's English locale-- are killed off by such curses as a giant ogre, a quicksand pit, and a woman whose beauty is the disguise for an ugly hag (Maila Nurmi, aka "Vampira").  One of the oddest deaths is that of the Irish knight Patrick, who even in dying saves George by what Lodac describes as "the power of his faith"-- the only overt Christian reference in the film, and one I found jarring amid all the wild fantasy.

Naturally George makes it to the wizard's castle, though thanks to the meddling of his foster mother he loses his magical weapons and is captured by Lodac.  This misfortune gives Helene the chance to reciprocate his love before she's lined up to be the dragon's next meal.  Sybill redeems herself in helping George re-arm himself to fight the dragon and for good measure finishes off Lodac as well.  The happy ending is so happy that by some unspecified grace the six slain knights are all brought back to life.

SWORD's simple FX, mostly supplied by makeup or puppetry, were nothing that would given Ray Harryhausen any sleepless nights.  I remember vaguely liking SWORD when I saw it at some young age, but while I can easily imagine its FX being charming or frightening to persons in the right mood, I don't think I got much out of them back then, and they didn't do much for me now.  All things considered, despite some pleasing moments-- mostly those involving Winwood's dotty witch-- Schoenfeld's script lacks the heart of the better Harryhausen productions, or for that matter Gordon's previous kid-film outing, the far superior BOY AND THE PIRATES (1960). 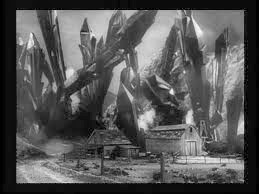 In contrast, I remember liking THE MONOLITH MONSTERS quite a bit when I saw it in my youth.  Having been exposed to any number of films about giant ants or apes or dinosaurs, I liked the comparative originality of MONOLITH's menace: meteoritic minerals, whose crystalline facets expanded on exposure to earthly H2O.  Their menace was at once pitless and motiveless: they would grow into titanic Babel-like towers, which would then collapse under their own weight, and scatter their pieces into new territory, like lethal seed-pods.  Like any other unthinking organism, the monolith-minerals were utterly unconcerned about anything that happened to be in their path.  In addition, the deadly crystals automatically leech silicon from living forms, causing their bodies to petrify.

What I now notice, though, is that while the mineral menace is still impressive, the so-called "human interest" is, well, kind of inert.  Director Jack Arnold's two famous "desert noir" films-- 1953's IT CAME FROM OUTER SPACE and 1955's TARANTULA-- use the same police-procedural plotting seen in MONOLITH. There's a slow, gradual introduction of the metaphenomenal whatsit into some low-key, humdrum setting-- then some catastrophe, shrouded in ambiguity-- and finally, the revelation of the metaphenomenality's true nature, at which point the viewpoint characters labor mightily to find some solution.  However, the characters of Arnold's desert noirs are simple but reasonably compelling.  In MONOLITH, for which Arnold has only a story credit while the final screenplay is credited to Norman Jolley and Robert M. Fresco, the characters are no more than ciphers, drearily fulfilling their roles-- the hero, the hero's girlfriend, the innocent victims, the gruff newspaperman who gets his wish to see something break the monotony of small-town life.  I'm not necessarily assuming that Arnold's final input made the difference, since MONOLITH's screenplay writer Fresco was Arnold's collaborator on the TARANTULA script.  But for whatever reason, the human characters don't provide the pathos needed to counter the grim neutrality of the monolith minerals.

I will note that the opening of MONOLITH provides some interesting symbolic considerations of the meteors, regarding them as both "bits of the universe" and "shooting stars on which wishes have been made."  However, these metaphors are not developed during the remainder of the film.

Posted by Gene Phillips at 2:55 PM
Email ThisBlogThis!Share to TwitterShare to FacebookShare to Pinterest
Labels: combative adventures, the marvelous