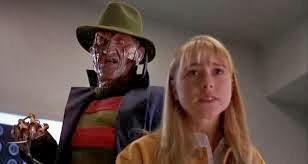 
Thomas Wolfe penned the famous motto/book-title "You Can't Go Home Again."  For many filmgoers, George Lucas would be the best proof of Wolfe's dictum.  But whatever failings the Second Trilogy had, I submit that Wes Craven makes a far better exemplar.

I can understand that Craven may have resented the fact that the character he created went on to make massive amounts of money for the producers who owned Freddy.  That said, though he claimed that he wanted to make a more "cerebral" version of Freddy than the producers had been turning out, NEW NIGHTMARE is short on ideas and long on repeating narrative tropes from the first film.  If Craven had wanted to prove himself the superior writer of all things Krueger, it might have been better to break fresh ground.

The only novelty in NEW NIGHTMARE is a metafictional notion that wears out its welcome very quickly.  The 1994 film, rather than taking place with the diegesis of the ongoing series, takes place in "our" reality, wherein Freddy Krueger is believed to be nothing but a role played by actor Robert Englund.  The same is true of Freddy's nemesis Nancy, as the film follows the workaday world of actress Heather Langenkamp.  But her real world begins to crumble as strange things begin to befall her family.  Initially she merely has dreams of Freddy's metal claw coming to life on a movie-set.  Then her "real-life" child Dylan begins to recite lines from the ELM films even though he has not seen them, and her "real-life" husband is killed in a mysterious automotive accident that leaves the semblance of claw-marks on his body.

These phenomena dovetail with a new script being circulated in the industry by Krueger's creator Wes Craven, appearing as himself in the film.  Both he and Robert Englund experience the same unsettling dreams to which Langenkamp is subject. Oddly actor John Saxon is not affected at all-- recalling to mind my earlier remark that Freddy seemed to have no interest in knocking off Saxon's character at any time in the regular film series, even though that character facillitated Krueger's execution.  After Langenkamp suffers for roughly an hour, worrying about her son having attacks and psychotic episodes, she finally manages to take a meeting with Craven.  He advances the notion that there is some real demonic entity that has become linked to the story of Freddy Krueger, but that rather than being summoned by it-- the most common trope of similar stories-- the demon is contained by the story, like "a genie in a bottle."  (Naturally, one could hardly expect Craven to find himself guilty of having conjured forth a murderous demon.)  The thing that releases the demon depends on the degree to which the story is maintained in the culture, much as a myth is ritually celebrated in tribal society. If the story becomes too familiar to the audience, or is watered down to make it more saleable, or is banned from society for being too upsetting, the demon can be set free.  I particularly like the last one: it's a nice turnaround to say that the people banning books are responsible for unleashing the demons-- which some would say is true, at least in a metaphorical sense.

That said, perhaps because he's dealing with the simulacra of real people, Craven doesn't manage to make the perils of Langenkamp and Dylan all that compelling.  Naturally he dispenses with most of Freddy's signature sadistic humor, since that was a contribution of other writers.  Occasionally it was interesting to see Freddy Krueger again played as the ruthless murderer from the first film.  But I found myself becoming impatient when Craven actually repeated visual tropes, like Freddy lengthening his arms or killing a victim by invisibly hurling her up against the room's ceiling-- both tropes from the first film.  Because the budget was about seven million dollars higher than that of the first film, Craven does indulge in a few more spectacular effects-- but at other times I wondered where the money went.  And I certainly didn't think it imaginative to unveil the "true identity" of the Freddy-demon as a clichéd horned devil.

The film's most enjoyable moment for me was a scene which is merely supposed to fill Langenkamp with unease.  She's guesting on a talk show, conversing with the host about the ten-year anniversary of the ELM STREET franchise, when the host unveils a surprise appearance by "Freddy Krueger"-- this time, merely the real-life Robert Englund in full makeup.  The scene in which Englund plays to the crowd, while the crowd exults in his portrait of a savage murderer, is the single best part of the picture.


Posted by Gene Phillips at 3:35 PM
Email ThisBlogThis!Share to TwitterShare to FacebookShare to Pinterest
Labels: the marvelous