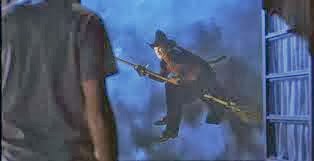 This film-- whose title I'll shorten to FINAL, even though it wasn't anything of the kind-- suffers from a bad reputation, even among ELM STREET sequels.  Yet for all its flaws I found it an improvement over DREAM CHILD, which as I noted here suffered from a theme inappropriate to the ELM series.  Though a lot of the scenarios in the script-- co-scripted by first-time director Rachel Talalay-- are far too broadly comic, at least the story returns to the theme of "never trust anyone over thirty," a far more fruitful theme than "the right to life."

If DREAM CHILD was all about Freddy becoming a son again-- though in a metaphysical sense he also would have been his own father-- FINAL is all about Freddy himself being a real parent.  As always, having been closed off from entering the real world by his previous gateways, Freddy seeks a new one.  Apparently his time being imprisoned in the body of his ghostly nun-mother reminded him of the Facts of Life, for he suddenly remembers that when he was a living human, he sired a child.

The film begins in the dreams of an unnamed male teenager, who for the remainder of the film will be addressed as "John Doe."  For some reason he dreams that he is the "one surviving teenager" in a world where some phenomenon-- read: "Freddy"-- has slaughtered almost all the other teens in the country.  He encounters Freddy in the dream. Freddy expels him from the dream into reality, uttering the odd phrase "be a good little dog and go fetch!"  Because John has no identification or memories, he's taken to a youth shelter, where he encounters case worker Maggie Burroughs.  Maggie in turn interacts with three of her teen charges, and with Doc, a psychologist who uses dream-therapy on his patients.  All three of the teens-- males Spencer and Carlos, and female Tracy-- suffer from bad dreams, brought on by some form of parental abuse.  Carlos' mother deafened him by probing his ears to clean them, while Tracy's father sexually molested her.  Yet rich boy Spenser's father gets the most opprobrium, for not only does he demand that Spenser be just like him, Spenser accuses him of having committed "date rape" and having tried to set Spenser up with "his girlfriend's older sister." In conversation Doc hints that Maggie too has bad dreams.  He's also the first character in the ELM series to supply a rational as to why Krueger's ghost is so damn powerful, as he mentions to Maggie the lore of "dream demons," creatures that inhabit the dream-world and are willing to bestow power on "the most evil, twisted human imaginable."

A Springwood newspaper clipping on John's person leads Maggie to take him to the cursed community; by chance-- or possibly by Freddy's designs-- the three troubled teens stow away in Maggie's van, hoping to escape the shelter.  After Maggie and John research the story of Springwood's kid-killer-- which Talalay handles in an overly jokey and inconsistent manner-- they learn that he had another life beyond being a serial murderer: that he also had a child, though they can learn nothing about the child's identity. John becomes convinced that Freddy spared him because he is the child of the Dream Master.

Talalay doesn't tease the viewer long with the true identity of Freddy's offspring.  Not long after Freddy kills John and mentions that his sole offspring was a daughter, Talalay doesn't even try to create suspense about whether it might be Maggie or Tracy, but reveals it to be the former almost right away.  Tracy, Carlos and Spenser are all put the mental meat-grinder as their dreams force them to confront their bad parents-- always disguises for Freddy's sadistic pleasures, of course.  He's particularly nasty to deaf Carlos, and even mocks Tracy with Carlos' severed ear. Tracy is the only one to survive, though the duty of forcing Freddy into the real world in order to re-kill him is left to Maggie.  This she does manage, though it sometimes strains credulity that a caseworker for troubled teens could use edged weapons as well as Maggie does.  Freddy enjoys a fairly imaginative death that reveals a touch of sadism in his darling daughter-- something in the blood, no doubt.

I have reservations about the depiction of Freddy Krueger as having been any sort of "family man," even a deceptive one.  In my view the character works as a disaffected loner who takes out his animus for society on children-- an image implied by the majority of the films.  On the plus side, FINAL is the only film to devote much time to depicting Freddy's maltreatment by "normal" children and adults, being beaten by a foster father and having schoolmates call him "son of a hundred maniacs."  And in addition to providing a much needed rationale for Freddy's powers-- the "dream demons" are seen emerging from Freddy's body after he is destroyed-- the film dwells quite a bit on the Sadean qualities of pain, as Freddy tells his foster father, "You wanna know the secret of pain? If you just stop feeling it, you can start using it."  It's also interesting that the film briefly toys with the idea that Freddy may be able to "rewrite" reality as he pleases, an idea not advanced since the first ELM film.

But the best line in the film is when Freddy asserts his universality.  He's not confined to the place of his original death simply because "Every town has an Elm Street!"  This universality may help explain the appeal that Freddy has, that he goes beyond the limited goals of most vengeful spirits.

Posted by Gene Phillips at 2:55 PM
Email ThisBlogThis!Share to TwitterShare to FacebookShare to Pinterest
Labels: combative dramas, the marvelous