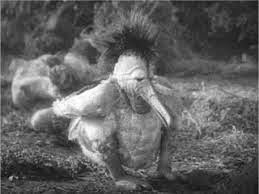 
The TAI CHI films of director Stephen Fung offer good basic fantasy kung-fu  set in China at the turn of the 20th century. This has been a fertile ground for Hong Kong/Chinese filmmakers, but Fung offers a different touch: the machine-loving West in this film is more technologically advanced than it was in the real world, so that once or twice we see wild "steampunk" mechanisms that would have been impossible during the real world.

On the Chinese side, the traditions of magical martial arts, this time subsumed under the discipline of "tai chi," remains pretty consistent with other cinematic depictions, in that true masters of the art can perform phenomenal physical stunts.  As an extra added attraction, the hero Lu Chan (Jayden Wong) seems to have some sort of demonic persona within him, but this aspect of his nature is not explored in any detail in the two films.  Presumably Fung intends to wrap up the supernatural subplot in a sequel, but anyone watching should be aware that this plotline will not be resolved.

In the first part, Lu Chan-- the "zero" of the title-- seeks out a remote Chinese village in order to learn the art of tai chi, in order to cure his particular demonic malady.  The locals all refuse to train him, including the pretty daughter of the village's grandmaster, Yu Niang, and they meet his requests for tutelage by thrashing him in assorted comic scenes. Over time Lu Chan learns to approximate the moves of the villagers from watching how they move as they beat him up.  At the same time, Yu Niang's fiance Feng Zei-- obviously the villain, since he wears Western clothes-- plots to dispossess the people of the village and use their land for a new railroad.

The first film has a nice blend of comedy and action, particularly when Lu Chan and Yu Niang join forces to defeat the monstrous octopus-armed wrecking machine Feng Zei brings with him.  However, the second film loses the comic feel once Lu Chan becomes a kung-fu superman, losing all the winsome qualities he had before, and even winning over the stubborn female lead.  HERO is just as spectacular as ZERO, but it lacks the heart of the original. And as said before, the lack of closure with respect to the demon-plotline is aggravating.

At times Fung's script hints at some rapprochement between the science-based outlook of the West and the mysterious arts of the East.  All too often, though, he succumbs to the frequent chauvinism of Chinese films about this historical period, and so undermines the validity of his implied theme.

ADDENDUM: Originally my review was accompanied by a repro of a TAI CHI lobby card. But even though there are numerous film-review sites featuring similar material for these two films, someone associated with the film and/or its distribution chose to file a legal infringement complaint. Presumably they didn't notice my site in particular, but just targeted a bunch of sites to justify their billable hours.

Since I don't care enough about these extremely minor films to counter-claim, I have erased the offending picture and substituted a picture of the Gooneybird from TARZAN ESCAPES, which sums up my opinion of the whole business.

Posted by Gene Phillips at 11:19 AM
Email ThisBlogThis!Share to TwitterShare to FacebookShare to Pinterest
Labels: combative adventures, the marvelous