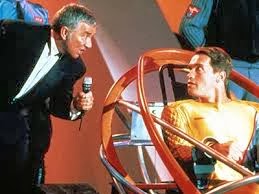 
Mundane sports films are most often "dramas" rather than "adventures."  Going by my Frye-influenced definition of the drama, the most frequent conflict of the sports protagonist is one of finding some expression of his talent-- be it athletic or intellectual-- without "selling out" to parasitic interests.  Since such films take place in contemporary settings, there can be no question of overthrowing the status quo. At best the sports-protagonist's best shot consists of carving out his own place in a corrupt world.

In futuristic scenarios, there exists more potential for the individual to strike back against the system, though some scenarios are more founded in reality than others.  In the dramatic novel THE RUNNING MAN-- written by Stephen King under the Richard Bachman pen-name-- protagonist Ben Richards needs money badly.  He surrenders his life to the deadly "Running Man" game, which means that he must elude killers licensed to slay him on sight-- a scenario which probably owes something to the Robert Sheckley short story "The Seventh Victim."  King keeps his sci-fi future very close to the current naturalistic world; the only "marvelous" aspect of it is the Orwellian level to which King elevates his world's repressive government. From the first it's clear that Richards has no chance to overthrow the ruling class that keeps the populace suppressed with televised "bread and circuses."  The best Richards can manage is a pyrrhic victory against Killian, the man in charge of the "Running Man" game.

The Arnold Schwarzenegger film largely jettisons any of King's quasi-Marxist sociological themes in favor of a big, splashy action-film.  This RUNNING MAN also begins by showing that the future is dominated by a corrupt leadership that allows "murder for entertainment," but there the similarities to the novel cease.  First, the film's script allow for a covert underground resistance movement that will make it credible that the evil government will be overthrown without all that much trouble, thus dissipating the depressing Orwellian spirit of the King novel. Second, in the novel the police department is fully implicated in the corrupt status quo.  In the movie, Schwarzenegger's Richards is first seen as a police helicopter pilot.  When some person in authority orders Richards to open fire on unarmed rioters, Richards nobly refuses-- but one has to ask, how did such a noble soul ever advance to that position, to a point where his superiors would assume he would carry out such orders?  It's clear that the scriptwriter merely wanted to put the Schwarzenegger persona in a "heroic" mode as quickly and simply as possible, without maintaining the logic of the premise.

At any rate, Richards goes on the run from the law.  He makes some potential allies with the resistance movement, but he's betrayed to law enforcement by ordinary citizen Amber Mendez (a loose rewriting of a King character).  Damon Killian (Richard Dawson), who is both the manager and the TV host of "the Running Man," decides that he wants Richards to be his next televised victim, and uses foul means to compel Richards to sign on to the game.  In place of the mundane armed men who pursue the novel's protagonist, the film offers stalkers with names and costumes out of a superhero film-- "Subzero," a hockey-skating killer, "Dynamo," garbed in an electrically charged suit, "Buzzsaw," who wields his titular weapon on a motorcycle, and "Fireball," who sports a flamethrower.

Though it's moderately fun to see real-life game-show host Dawson essaying an evil version of that role, the script is bereft of any sociological meaning, and even the Orwellian theme of "rewriting history" falls flat.   Arnold's battles with the various menaces are the film's only saving grace, and they're fair at best on the purely kinetic level. 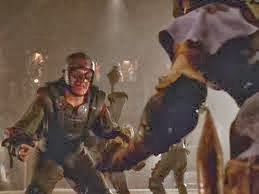 Though BLOOD OF HEROES takes place in a post-apocalyptic "Mad Max" type of world-- right down to being shot entirely in the Australian outback-- the 1989 film doesn't have a hero in the mold of Mel Gibson's Max.  Whereas Max's struggles against the savage denizens of his world were meant to lead to a renovation of the fallen order of things, the protagonists of BLOOD fight only for their own survival. To be sure, as is often the case with sports movies, survival is also tied in part to a sense of personal honor.  But though this futuristic society is also divided into your basic "haves" and "have nots," there is no convenient revolution as we see in RUNNING MAN.

The "haves" are the elite classes that inhabit the Nine Cities, the only remaining citadels of civilization. The "have nots" are various tribes that eke out a hardscrabble life in their "dog-towns," where their only entertainment is furnished by traveling bands of players called "juggers."  The juggers engage local players in "the Game," which is best described as a combination of football, hockey, and gladiatorial combat.

The two main "heroes" of the film comprise the basic ensemble of the "old pro and his young student."  Sallow (Rutger Hauer) and his team arrive at a small dog-town for a game.  Kidda (Joan Chen), a young local woman yearning for a way out of her miserable existence, fights on the locals' side in the game and permanently injures one of Sallow's team-mates.  This leaves Sallow short a team-member, and gives Kidda a way to pursue her dream of prominence through sports.

Sallow, she learns, has seen better days than the dog-town route.  At one point Sallow was a member of the Cities' official "leagues," who receive high salaries and esteem from the elite classes.  Sallow made the mistake of openly romancing a woman of the upper classes, which got him kicked out and relegated to the dog-towns.

However, ambitious Kidda proposes that their team could journey to one of the Cities and issue a challenge to the local League-team.  Her motive is self-advancement in that she hopes to be "spotted by the majors," so to speak.  But once she puts the idea into Sallow's head, the Old Pro feels compelled to put his team on the line-- not to overthrow the elites, but just to find his self-respect once more.

The characters, including principal heroes Sallow and Kidda, are not deeply drawn, though they're Shakespearean compared to the protagonists of most post-apoc adventures.  The emphasis here is on the action-scenarios-- given verve by the driving rhythms of Todd Boekelheide's score-- and the basic theme of personal honor.  This theme is borne out by the "blood of heroes" line quoted above.  The line is spoken by a spectator of the climactic game, a woman who may well be Sallow's former lover.  She has no significant action thereafter, so it seems her main purpose is to enunciate the theme: that there is a "heroism" in sport that transcends its brutality.  In contrast, the man to whom she speaks the line, a high mucky-muck with the risible name "Lord Vile," can only see brutality.  Like most sports films this one ends with a victory for the underdog, but BLOOD sells something more than facile victory, as does RUNNING MAN.  As the title suggests, it suggests the sacrificial aspect of sports, and the notion that such sacrifice springs from a nobility that does not depend upon social stature.
Posted by Gene Phillips at 3:24 PM
Email ThisBlogThis!Share to TwitterShare to FacebookShare to Pinterest
Labels: combative adventures, the marvelous