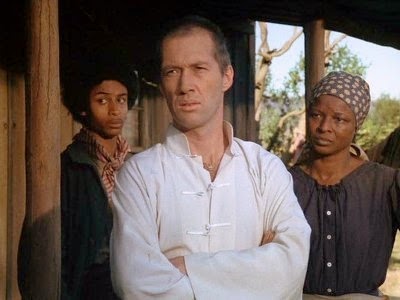 
KUNG FU's second season commences with one of its strongest dramatic exercises. Caine, sick from having drunk bad water, wanders into a town and is set upon by a bullying deputy and his buddies. Even sick, Caine floors them all, but is on the verge of collapse with a young boy, Daniel, who gives the traveler a ride in his wagon and takes him to his parents' small ranch.

Parents Caleb and Elizabeth are both ex-slaves, implicitly freed by emancipation, but Caleb remains bitter over his experiences and suspicious of any stranger who might bring trouble to his family. Because of his hostility, Caleb has concealed from his neighbors that his property has a hidden well, one that keeps him and his family well-watered at a time when most of the community suffers from a water shortage. Caine is pursued by the irresponsible deputy, but this doesn't develop into a major threat, given that the local sheriff soon becomes aware of his subordinate's shortcomings.  The main focus of the story is upon Caleb's struggle to overcome the ghosts of his past. Since Caleb wears the brand of a slave, he's particularly affronted to learn that Caine branded himself as part of his Shaolin training-- and though the episode doesn't offer any easy solutions, the comparison does allow Caleb some understanding of the relative nature of the humiliation he's suffered.  The conclusion is also cautious not to suggest that the black family should simply throw its bounty open to all its white neighbors, but still finds a way for them to extend charity to those neighbors while protecting themselves. 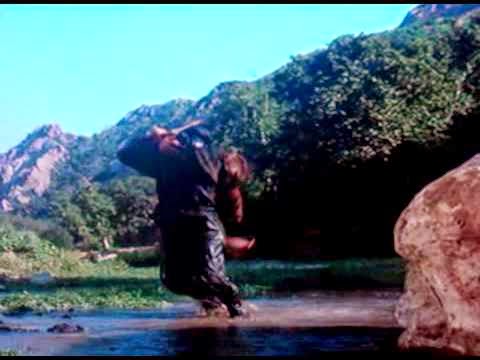 Though in previous episodes Caine was forced to duel other martial-arts masters, "The Assassin" provides his first martial adversary who qualifies as an uncanny threat. While on the road Caine witnesses the murder of a stagecoach-driver by a masked man clad in black.  He soon learns that the owner of the stage-line, one Jones, has an ongoing feud with Swan, the owner of a trading-post-- a feud based in some past altercation that's never explained. When Caine meets Swan, he also meets his Japanese wife and half-Japanese daughter, both of whom maintain the priorities of their culture with regard to female deference to the male head of the family.  Daughter Akiko is slightly rebellious, and though a local white boy shows a yen for her, she tries to talk Caine into marrying her and taking her away from the ongoing conflict. The scenes between Akiko and Carradine's Caine are handled with sensitivity, for while Caine respects her immensely, he doesn't have any romantic feelings for the young woman, and must discourage her as gently as possible. Meanwhile, Caine soon ferrets out that the killer is a Japanese ninja, imported by Swan to compensate for Jones' own hired henchmen. Caine senses that the only way to defuse the conflict is to provide a scapegoat-figure by bringing in the hired killer, which results in a very cool battle between the bare-handed Shaolin priest and the weapon-wielding ninja. 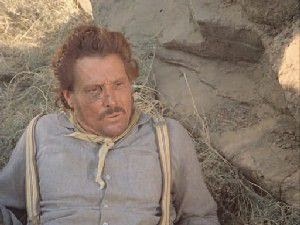 "The Chalice" is a more involved meditation on the problems of becoming owned by one's possessions. By his training, Caine exists with only the most rudimentary of possessions, and seeks not to become attached to any objects.  He happens upon a robbery, four bandits stealing a golden chalice from Father Benito, a Mexican priest who lives in the nearby monastery of San Blas. Benito is fatally wounded, but as he dies he reveals to Caine that the reason he held the chalice with him was because he had formed a lustful attachment for the vessel. Benito himself crafted the chalice to be displayed in the church's tabernacle, but he conceived a desire to own the chalice himself, rather than letting the church keep it. He fears being doomed to hell for his sin-- a concept hard for Caine to understand-- but still he enjoins the Taoist priest to recover the chalice, to make indirect restitution for the Christian priest's sins. Caine remembers his own past indebtedness to other priests-- not only the Taoists who raised him, but a Christian missionary who helped Caine escape China-- and so of course he agrees.

The four bandits prove to be lesser opponents, even though they've stolen a gatling gun from Caine's main opponent, Captain Luther Staggers. Staggers is apparently an ex-cavalry officer who deals in weapons, and he's not too happy when Caine, in the midst of recovering the chalice and defeating the thieves, also wrecks the gatling gun. In an inversion of Benito's selfless desire for restitution, Staggers wants Caine to yield the chalice as compensation for the ruined weapon. Caine refuses, and this leads to a climactic battle.  Since the show's producers obviously wanted to come up with ways to challenge Caine without resorting to martial-arts foemen, here the script has Staggers-- played by the huge actor William Smith-- devise a heavy chain-weapon, which he tries to use to smash open Caine's head. But the story's moral meditations are the main attraction. Even Caine, as we learn from a flashback, has had experiences in which he became enthralled by a particular possession. Thus when he exculpates Benito's sin of possessiveness, in a sense he does so for himself as well.
Posted by Gene Phillips at 3:14 PM
Email ThisBlogThis!Share to TwitterShare to FacebookShare to Pinterest
Labels: combative adventures, the naturalistic, the uncanny