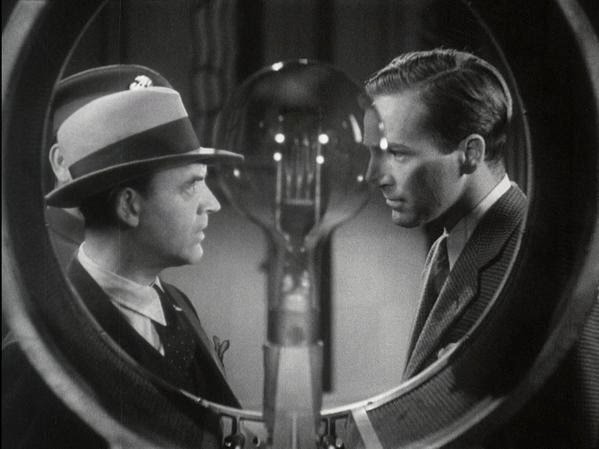 It would be easy to resent this minor mystery-thriller as a harbinger of Bela Lugosi's future marginalization in Hollywood. Lugosi is reunited with two co-performers from 1931's DRACULA, David Manners and Edward Van Sloan, but both actors are given much better lines. With Manners it's understandable, for he's the real star of the show.  When a much-disliked actor is killed on a film, Manners' character, a smart screenwriter named Franklyn Drew, makes it his business to solve the crime in order to clear his actress-girlfriend.

DEATH KISS is pretty standard for this type of fast-paced murder mystery, and Manners is reasonably entertaining trading quips with the investigating cops, who of course are all idiots. Lugosi is merely a studio manager seeking to keep his place of employment from suffering bad press. I imagine the producers merely wanted to suggest a slight aura of horror by casting him in a minor role. But there's nothing horrific in the script as such, and I disagree with any concordances that deem this a "fantasy-film"  simply because it has Bela Lugosi in it. The suggestive title also adds up to nothing, for "Death Kiss" is simply the title of the movie that's being filmed when the victim is killed. As a very slight irony, though the source of the "death kiss" is an evil temptress in the film's script, the actress playing her is entirely likeable, if dull.

The only slight claim DEATH KISS might have to metaphenomenal status is the method of the murder.  I've rated some mystery-films, like THE JADE MASK,.as "uncanny" if the murder-devices suggests the quality I've frequently called "strangeness." But not every "infernal machine," as some authors call them, are automatically (heh) uncanny. In this essay I referenced one naturalistic "machine"-- a gun rigged to shoot a victim at a certain time. To make such a mundane device "strange," one needs some sense of its being given a peculiar tonality-- which I did find in one of the films reviewed here.

But KISS' murder-method-- a simple derringer loaded into a camera-- didn't suggest any strangeness for this viewer. I don't recall that anyone makes the obvious pun about finding a "shooting iron" in a device meant for "shooting actors" in a non-fatal manner.
Posted by Gene Phillips at 5:01 PM
Email ThisBlogThis!Share to TwitterShare to FacebookShare to Pinterest
Labels: diabolical devices (n), the naturalistic