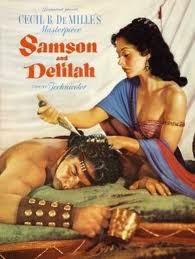 
In contrast to 1953's SALOME. the scripters for Cecil B. DeMille's SAMSON AND DELILAH had a wealth of Biblical material to work with, for the Samson material in Judges is replete with all the spectacular incidents a Hollywood moviemaker could ever want. However, unlike many of the narratives in the Bible, that of Samson and Delilah is infused with the wild illogicality of myth and folklore.  Not surprisingly, DeMille did not attempt to depict some of the more eyebrow-raising deeds of Samson, like tying torches to the tails of three hundred foxes in order to set fire to Philistine crops.

Male heroes in American-made religious epics tend to be depicted as either righteous men from beginning to end, or men who stray from righteousness but end by re-affirming the Judeo-Christian ethos. The script for SAMSON intends to portray its hero (Victor Mature) in this manner: an early scene has Samson's mother chastising the hero for wenching, roistering, and being too friendly with the Philistines who hold dominion over the Jewish tribe of Dan, Samson's own people. The mother urges the hero to settle down and marry Miriam, a nice Danite girl. His response is to chase after Philistine girl Semadar (Angela Lansbury).

Semadar is the name the script gives to the unnamed Biblical wife of Samson, but the script also throws in a few interesting myth-allusions. Semadar is first seen wearing Philistine armor and hurling a spear at a picture of a lion, preparing herself for an anticipated lion-hunt. Her father compares her to the Greek goddess Dictynna, an analogue of the "mistress of animals" Artemis. Perhaps the scriptwriters wished to make Semadar as different as possible from her younger sister Delilah (Hedy Lamarr), who has more in common with Aphrodite, and with feminine arts of persuasion rather than masculine arts of force. When Samson comes calling for Semadar, Delilah hangs around, clearly planning to steal the Danite muscleman from her sister.

I'll pass quickly over some of the "high intrigues" of the story-- how Samson's suit interferes with a Philistine general's desire for Semadar, how the Danite hero's famous bare-handed slaying of a lion impresses the Philistine king, the Saran (George Sanders). In short, the film takes the "bride story" from the Old Testament-- in which the bride's father gives Samson's bride to another man and then tries to convince the Danite to accept an unnamed younger daughter-- and converts the whole plot to the contrivances of Delilah, who wants her sister married to anyone else and herself wed to Samson. Delilah's plan backfires. Delilah convinces Semadar to betray Samson's confidence, bringing about a battle between Samson and his Philistine groomsmen, a battle that results in the deaths of Semadar and her father. In a strong "Scarlet O'Hara" moment, Delilah swears vengeance on Samson, and her words suggest that she experiences some guilt for her own role in causing her family's demise.

After the Philistines fail to capture Samson by force-- yielding the crowd-pleasing scene in which the hero slays dozens of soldiers with "the jawbone of an ass"-- Delilah offers her services to  Saran's court. One courtier asks her if she plans to drive a stake through his head, as Jael did to Sisera (another nice mythic touch), but Delilah promises to conquer her enemy not through the "force of arms" but "the softness of arms."

I need not go into a lot of detail about the familiar conclusion, except to point out that Delilah regrets her betrayal of Samson to the Philistines, and allows herself to perish when the blind hero pulls down the pillars of Dagon's temple. One of the effects of Delilah's self-sacrifice, though, is that it works against the film's supposed theme, in which Judeo-Christian modesty is extolled over pagan glamor. The effect of Delilah choosing to join Samson in death, though, is just one of many scenes that impart a heroic, almost Hellenic glory to Delilah, as much as to her strongman lover.

Moreover, even though SAMSON AND DELILAH is plagued with dozens of unintentionally risible dialogue-lines-- often rendered funny simply because they're uttered with midwestern accents-- DeMille's scripters succeed in filling the movie a catalogue with so many sadistic, masochistic, and penis-envy references as to warm the cockles of any Freudian heart. I'm tempted to generalize that while most American Bible-films are all about Freud's "reality principle"-- i.e. learning to respect life and live within limits-- SAMSON AND DELILIAH is more about Freud's so-called "pleasure principle," in which the joy of transgression, of polymorphous sexuality, is the main attraction.

The scripters also show some realization that certain motifs from the original narrative aren't logical in the light of later Christian rationalization.  When Samson does reveal his secret to the temptress, she doesn't believe it: "Do you really believe that this great god of yours gave you power through your hair?" When she clips him of his locks, what she's really doing is shearing away his confidence in God's gift. Thus the film, not wanting to imply that the God of the Fathers would mess about with folkloric gimmicks, strongly implies that Samson never really loses his strength; he merely *believes* that he has. Thus, when he regains his strength, it's not because the blinded hero's hair has time to grow back during his final captivity, as in the Bible narrative.

Yet, for what reason does Samson's strength return? It doesn't come back because Samson re-commits to the Lord of Hosts.  Samson first realizes that his strength is back when Delilah approaches him in his confinement. Full of hatred, he grabs her and lifts her over his head, intending to kill her. However, in so doing breaks his chains-- which leads him to realize that he can spring one last surprise on his enemies-- as long as Delilah doesn't betray him again. And so we see that in this particular Gospel According to DeMille, that a man's strength can not only be drained by sexual love, it can also be restored by the passion of a lusty hatred.  And that may be one reason why, for all its faults, SAMSON AND DELILAH is a helluva lot more fun to watch than most religious epics of this time-period.


Posted by Gene Phillips at 3:46 PM
Email ThisBlogThis!Share to TwitterShare to FacebookShare to Pinterest
Labels: combative dramas, the marvelous