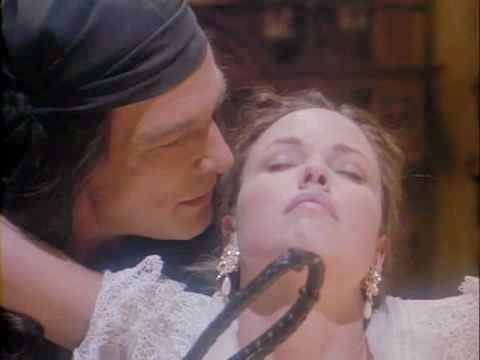 The two WAXWORKS films by writer-director Anthony Hickox are an anomaly within my Frye-influenced system of categorization-- a weighty sentence that shouldn't take away from how fun these adventure-horror films are, apart from their structural peculiarities.

I've designated most movies that can be easily identified as "horror" as "dramas" because most of the centric characters of these stories parallel the process of *pathos* that Frye finds characteristic of the dramatic work, as opposed to his other three literary *mythoi.*  Whether that centric character is an obsessed mad scientist or a giant radioactive lizard, these type of stories parallel the structure of the literary drama, in that this story principally deals with the destruction, or at least the near-destruction of some great individual. On occasion there have been film-narratives in which the focus is upon not the pathetic monster but upon the hero who battles the monster, and this frequently shifts the balance of the conflict from the domain of drama to that of adventure. Examples of this shift would include both the teleseries BUFFY THE VAMPIRE SLAYER and the three-film series that began with the 1999 MUMMY.  However, there have been a few times that a quasi-horror film keeps its narrative emphasis on its monster rather than upon the hero (or demihero), and yet still communicates the invigorating thrill of the adventure-mythos. As example, I noted that the first two films in the PROJECT SHADOWCHASER film-series emphasized this thrill, even though the third film in the series followed the dramatic mold of the ALIEN films.

The two WAXWORKS films are similar to the initial two SHADOWCHASER films, though with another exception. The latter two films oppose an android monster with two doughty heroes.  In contrast, the various monster-mash entities of the WAXWORK films-- whom I'll call "Cartagrans"-- are opposed by two demiheroes, Mark and Sarah. These two characters are admirably resourceful in opposing the monsters, so much so that the WAXWORKS films do carry the thrill of the adventure-narrative-- yet the narrative's emphasis is still on the monsters, not on the heroes.

WAXWORK begins like many slasher-films of the period, with the interactions of a bunch of high-school teens-- Mark and Sarah among them-- looking for kicks. Sarah and a girlfriend encounter Lincoln (David Warner), a strange British fellow who's opening a waxworks in their suburban neighborhood. Neither of them seems to think that the suburbs are a strange place for such a display, but the girls agree to come to the show's advance opening that night.

Unbeknownst to the teens, Lincoln-- a sorcerer many decades older than he looks-- has constructed the waxworks as a series of sacrificial traps.  Following principles that are supposedly derived from Haitian voodoo, each waxwork statue is capable of pulling a victim into a extradimensional world. There the statue becomes alive and kills the victim. If Lincoln can muster enough victims for his devilish display, he'll unleash a demonic apocalypse.  Teens die in various horrible ways-- victims of a werewolf, a mummy, and a vampire. Despite the fact that these beings sound like refugees from the late night movie, Hickox's script states that all of these re-creations were once real entities, for Lincoln has collected tokens from the original beings in order to revive his wax-demons. Most of them are not really historical, like the werewolf, but the list of nasties does include such genuine entities as Vlad Tepes and the Marquis de Sade.

Most of the teens die as cannon-fodder, but Mark and Sarah escape. Their attempts to figure things out lead them to a Van Helsing-type scholar, Sir Wilfred (Patrick MacNee). Wilfred informs Mark that his own grandfather gathered some of the tokens. Further, Lincoln killed Mark's grandfather in order to use the tokens for evil. The big climax involves Wilfred and his allies helping Mark and Sarah storm the waxworks in a big, lusty battle-scene.

The story is longer on action than psychology, but Hickox does come up with one atypical trope. Sarah, like a lot of female leads in 1980s horror flicks, is hesitant to come across with her boyfriend. However, late in the film she falls into one of the waxwork-scenarios, and becomes an initially willing, entirely masochistic victim to the brutality of the Marquis de Sade. When Mark intrudes on the scene, the Marquis mocks the young man, telling him that his would-be lover achieved her first orgasm beneath a whip. However, Hickox doesn't intend to explore this kink in depth, for Mark is able to talk her out of the sadistic fantasy, and he even gets to duel de Sade to the "death." 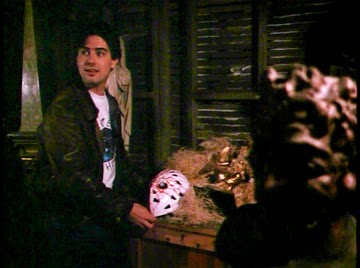 Since the evil waxworks is destroyed at the end of the first film, Hickox goes in a different, and somewhat contradictory, direction with WAXWORK II.  Because Sarah is accused of a murder because of one of the wax-demons, the teens must brave certain "time doors" beneath the ruined waxwork.  Though the idea of time-travel implies staying within one's own cosmos, Hickox explains that the doors actually take the youngsters into the dimension of Cartagra, where evil beings assume the appearance of monsters and devise scenarios to lure their victims to destruction-- all as part of something the Ghost of Sir Wilfred calls "God's Nintendo game."

Behind this confusing rationale lies the likelihood that Hickox simply didn't want to bother with the voodoo-token-calls-up-deceased-evildoers schtick. When Mark and Sarah venture into Cartagra, they start meeting all manner of purely fictional villains, from Doctor Frankenstein to Doctor Jekyll to a version of Ridley Scott's Aliens. In other words, Hickox wanted to write a love-letter to the horror-genre by having his protagonists stumble through a number of tongue-in-cheek battles with famous monsters of filmland. After Mark and Sarah work their way through enough scenarios, this film too concludes with a long battle-sequence-- though, as a slight twist, Mark is temporarily left behind in Cartagra, and the film concludes with Sarah seeking a way to rescue him.

I leaped over the circumstances of Sarah's murder accusation because they seem like a rather piecemeal explanation for the character's sudden masochism in the first film. When Mark and Sarah leave the destroyed waxworks, they're followed by one last wax-demon, an animated severed hand. (No idea what historical entity this was supposed to be linked to.) The hand follows Sarah to her house. There Sarah is greeted by her stepfather, who not only doesn't like her staying out so late, he also doesn't like her wearing one of her deceased mother's dresses. When the exhausted teenager gives him some lip, the stepfather comes close to backhanding Sarah-- but restrains himself. Not long afterward, the animated hand kills the stepfather, and Sarah, though unable to rescue him, destroys the hand-- which, unfortunately, leaves her looking like the only viable culprit in the murder. And if this seems like a wonky set-up, even wonkier is the vague solution Mark and Sarah come up with-- to journey into Cartagra and come back with some magical item that will prove their crazy waxworks story. And even wonkier, Sarah succeeds-- though, as I mentioned, she isn't able to bring Mark with her too.

Did Hickox mean to suggest that Sarah, with both birth-parents dead and being saddled with a maybe-abusive stepfather, had formed some sort of masochistic and/or incestuous tendencies? Maybe not, but it can't entirely be coincidence that her last trial in Cartagra involves her merging with the persona of an innocent girl in a medieval Poe-esque setting. This girl is not only destined to marry an older monarch who is not related to her, she's also menaced by her evil sorcerer-brother, who wants to assume the monarch's form, so that he can conquer both a kingdom and a sister.

Posted by Gene Phillips at 2:47 PM
Email ThisBlogThis!Share to TwitterShare to FacebookShare to Pinterest
Labels: combative adventures, the marvelous