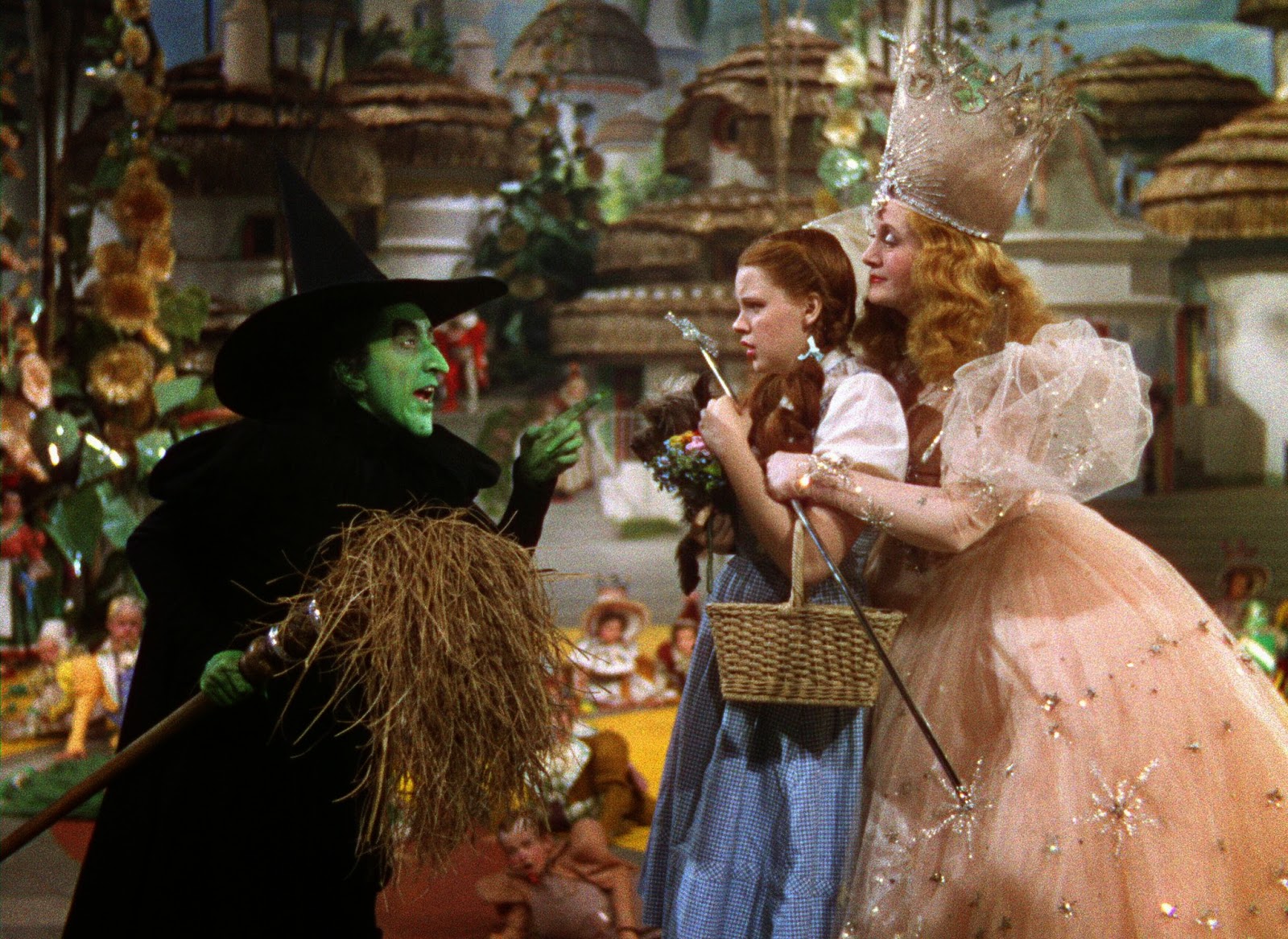 I've long had the same problem in reviewing the 1939 WIZARD OF OZ as I've had with Hitchcock's PSYCHO; both films have been subjected to endless quotes of key lines and extensive academic analysis. But since I've recently re-read Baum's first Oz book, THE WONDERFUL WIZARD OF OZ, I think it would be interesting to note some comparisons, rather than simply vegging out on all the iconic moments.

First, I consider both the book and the 1939 movie to belong to the category "drama." There are a lot of comic or adventurous sequences, as well as a handful of ironic touches, but both stories emphasize the pathos of Dorothy being separated from the life she's known. Her "separation anxiety," so to speak, is so great that even the endless fascinations of Oz's dream-world hold no attraction for her, except insofar as they help her get back home. However, it should be said that Baum doesn't spend as much time as the film does in delineating the simple charms of Kansas, and the success of the first book insured that Dorothy and other protagonists would make many more trips to Oz. In contrast, the 1939 film presents Dorothy's conflict as a completed journey, one that presumably will never be repeated.

According to the 1977 book MAKING OF THE WIZARD OF OZ, the first drafts of the film-script did not employ the device that Dorothy's trip to Oz was a dream. This development testified to the belief of MGM producers that general audiences would not give credence to the book's genuinely marvelous fantasy-world of Oz. I'd hypothesize some possible influence from Maurice Maeterlinck's 1908 play THE BLUE BIRD, which had seen adaptation into two silent films. The theme is certainly the same; that of the glorification of ordinary life as against childish fantasies. The play also presents its child-protagonists encountering humanized versions of homely house-pets and other phenomena, just as Dorothy's  Oz-buddies are patterned on the farm-hands she knows from home.  If there was such a behind-the-scenes influence, this would make it all the more ironic that the next year 20-Century Fox tried to steal MGM's fantasy-film thunder with an adaptation of BLUE BIRD-- an adaptation which flopped.

The 1939 Dorothy, then, embarks on her journey as a way of balancing her personal conflicts between "staying home on the farm" or venturing off into exotic lands.  It's highly significant that long before Dorothy has a good reason to run away-- that is, before she knows that Mrs. Gulch is going to try to have her dog Toto put down-- she's already thinking about seeking out some other world where people won't treat her like a mere child, that paradisiacal place "where troubles melt like lemon drops." It's been fairly objected that Dorothy's single-minded drive to get back home overlooks the ways in which the real world sucks: that Mrs. Gulch, the richest woman in the area, may again try to exterminate the little girl's dog. On the other hand, it's possible that the dog-hating harridan may have perished in the cyclone, though the film would have lost its happy-ending feel had it presented Gulch's death as a real outcome, rather than a symbolic one confined to the world of dreams.

In Baum's fantasy, there are no evil male or female figures portrayed in the Kansas seen only briefly at the book's beginning and ending. Thus Oz's authority figures-- the good witches, the bad witches, and the "humbug" wizard-- are more archetypal visions of good and bad authority, not necessarily only of a parental nature. In both film and book Dorothy is presented as a mild spirit who has no overt forceful tendencies. Her three male companions definitely incarnate the forcefulness she does not normally show, though all three have defects that keep them from being invincible. In the book, Tin Man, Scarecrow and Lion all have moments of genuine violence. The film downplays this potential in favor of comic sequences of fear, so that they arguably become more vulnerable than their prose originals.  This isn't to say that Dorothy lacks all initiative: in both book and film she intercedes to slap the Lion on the snout when he menaces Toto. Yet in Baum the mild-tempered little girl can be roused to real anger. In the book's middle section, after Dorothy has been forced to labor in the Wicked Witch's castle, the Witch succeeds in stealing one of Dorothy's slippers, and this makes the girl mad enough to hurl a pail of water at her tormentor-- albeit without knowing in advance that the water will destroy the evil sorceress.  For the film-version, even this minor display of ire toward an authority-figure born of dreams may have seemed too chancy, and thus Dorothy only kills the Witch while trying to save the Scarecrow from a fiery doom.

The progress of Dorothy in WONDERFUL WIZARD is linear. She goes from the East, where her house has killed the Witch of the East, and she picks up allies on her way to Oz, in the center of the Land of Oz. Her errand for the Wizard sends her and her friends to the West. After the death of the Witch of the West, the heroes' return takes them back to Oz, but the return to the center doesn't finish the story. Although the Wizard has managed to empower the three allies in his humbug-ish manner, he fails to deliver on his promise to Dorothy. This forces the three allies to accompany her on a second quest to the South, which gives them the chance to show off their new fortitude. Still, the quest can only be finished when Dorothy-- essentially taking on the power of a witch-- must invoke magical power to get the group past the land of the Hammerheads-- and only after doing this does she come into contact with a being of genuine knowledge, the Witch of the South, who alone knows how Dorothy can get home.

The film favors the entirely circular path from East to Center to West and then back to Center, appropriately resembling the circularity of the dream in which all the action takes place. But to make this work, the script must conflate the Witch of the North, who first tells Dorothy to seek out the Wizard, with the genuinely wise Witch of the South. This has the unfortunate effect of making it look like the film's Glinda, Witch of the North, is primarily concerned with using Dorothy's predicament in order to knock off the Witch of the West. One might argue that she has recapitulated the Wizard's bargain, albeit in altered form. In the book and film the Wizard challenges Dorothy and her friends to kill the Witch even though he isn't entirely sure that he can grant their wishes afterward, but at least they have the option of simply not obeying the challenge, since the book's Witch of the West isn't ceaselessly chasing them around. Glinda of the North knows from the first that she has the power to send Dorothy back, but chooses to let Dorothy seek out the Wizard when Dorothy already has the power to go home. Glinda's clunky rationale is that Dorothy "wouldn't have believed" that she had the power, but it still seems like Glinda has forced upon Dorothy an unannounced "quid pro quo." At least the Wizard makes his bargain clear, even if he falsifies his own power of compensation. Of course, within the logic of a dream, one may argue that Glinda isn't an entity with real agency. Rather, Glinda is the agent of Dorothy's own desire to kill off an evil authority-figure who mirrors one in the real world-- and that, more than any "belief," seems to be the real reason Dorothy has to stay in Oz for a while.  But in contrast to the book, film-Dorothy cannot be seen to assume any degree of real power, even temporarily-- so she goes back home, back to the life of a child surrounded by doting elders. The book's Dorothy returns to the bosom of family as well, but it's a family that has been so meagerly described that they can't help but seem more phantom-like than all the wonders of the Land of Oz. The book's last lines, unlike those of the film, place both the fantasy-land and the real world on a co-equal plane:

Aunt Em had just come out of the house to water the cabbages when she looked up and saw Dorothy running toward her.
"My darling child!" she cried, folding the little girl in her arms and covering her face with kisses. "Where in the world did you come from?"
"From the Land of Oz," said Dorothy gravely. "And here is Toto, too. And oh, Aunt Em! I'm so glad to be at home again!"

Posted by Gene Phillips at 3:27 PM
Email ThisBlogThis!Share to TwitterShare to FacebookShare to Pinterest
Labels: delirious dreams and fallacious figments (u), the uncanny