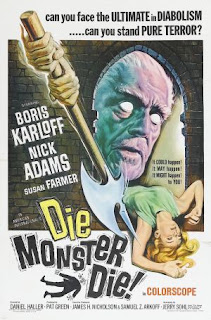 
It's ironic that even though Daniel Haller directed one of the best adaptation of H.P. Lovecraft in 1970, his DUNWICH HORROR, five years previous he collaborated on one of the worst HPL-films, 1965's DIE, MONSTER, DIE!

Haller had accrued many years working as art director for films, including some of Roger Corman's Poe-films like THE HAUNTED PALACE and THE RAVEN (both 1963). DIE was his first shot at directing, so it's arguable that he hadn't yet found his directorial "legs" at the time. But the film's greatest weakness is the dull script by Jerry Sohl, a writer of prose SF who's best known today for his script-contributions to TWILIGHT ZONE and STAR TREK.

Ostensibly DIE adapts one of Lovecraft's best regarded stories, his 1927 "Colour Out of Space," in which a meteor containing an eldritch entity-- little more than a "colour," with no physical form as such-- crashes to Earth on a Massachusetts farm, causes the local flora to mutate wildly, and slowly poisons the inhabitants of the farm. Like many Lovecraft stories, it's a study in decay, mental and physical.

Haller and Sohl keep the malignant meteor, but they insert it into a passionless imitation of the Corman Poe films. The basic set-up resembles Corman's first Poe-film HOUSE OF USHER in that a young man, the film's viewpoint character, journeys to a remote old mansion in search of a young woman he's met, only to meet opposition from the young woman's older relation. However, I suspect Haller and Sohl took most of their inspiration (if one can call it that) from either HAUNTED PALACE or the novel on which that film was based, HPL's "Case of Charles Dexter Ward." There are no characters in "Colour" with a surname resembling that of DIE's mystery-plagued "Witley family," but both "Charles Dexter Ward" and its film-version include a viewpoint-character named "Willett." Even more compelling is that the grey eminence of the Witley family Nahum (Boris Karloff) has a skeleton in his family closet, for his father Corbin (= "Curwen" of "Charles Dexter Ward") was both a madman and a delver into devilish lore. For what it's worth , though "Colour Out of Space" didn't include a "sins of the fathers" theme, this was a frequent theme in other Lovecraft stories, not just "Charles Dexter Ward."

In any case, young American hero Stephen (Nick Adams) shows up at the Willett house, which is located in an English version of Arkham, as opposed to the prose work's Arkham in Massachusetts. Because Susan met Stephen at at college and talked about him to her mother Letitia, Letitia invites the American to visit the house, hoping to get him to take Susan away from the meteor-poisoned atmosphere. Susan, who's been back at home for about a month, is concerned for her mother's illness but doesn't seem to notice the strange, intense behavior of her father Nahum or the manor's servants. Stephen is immediately suspicious of the strange goings-on, though, particularly when he's attacked by the female servant Helga. In time his attention is drawn to Nahum's greenhouse, where he encounters some of the freakish products of the meteor.

There's not much narrative drive in Sohl's script, in part because the action is almost totally confined to the grounds of the Witley manor. Since Stephen is trying to win Nahum over as a potential father-in-law, he doesn't follow Letitia's advice at first, though as he sees more weird things he does at least encourage Susan to depart. Eventually he gets a few dire intimations from Arkham's doctor, who presided over the mysterious death of Corbin Witley. but the script never makes clear what Grandpappy Corbin had to do with the meteor. Nahum is of a piece with dozens of other well-meaning transgressors played by Karloff in past films. and the film only catches fire a few times thanks to the passion that Karloff gives to the mostly uninspired dialogue. Nahum finally talks Stephen into taking Susan away, but instead of waiting till the young people leave, he decides to attempt destroying the meteor while his daughter and her suitor are still about-- leading to a predictable "monster on the loose" conclusion.

All of the cosmological menace of the "Colour Out of Space" is sacrificed here in an attempt at evoking a vague metaphysical evil ("Don't do demonology, kids") and there are nearly none of the psychological complexities found in the better works of Corman's Poe-cycle. The most I can say for DIE MONSTER DIE is that it may have encouraged Haller to attempt a less cluttered, more direct adaptation of Lovecraft the second time around.

Posted by Gene Phillips at 3:45 PM
Email ThisBlogThis!Share to TwitterShare to FacebookShare to Pinterest
Labels: the marvelous