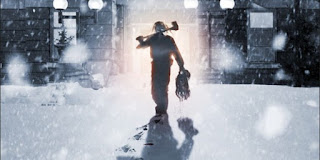 At the end of my review of WRONG TURN 3 I allowed that Declan O'Brien's directorial work on that film was at least slightly more competent than two other metaphenomenal films he'd both written and directed. But MONSTER ARK and SAVAGE PLANET. However, his writing-and-directing work on the next two entries in the WRONG TURN series constitute a "turn for the worse" in their own right.

I confess that I haven't seen that many of the more prominent "torture porn" films, and I admit that there probably isn't any clear dividing-line between this category and other types of violent horror film, like the "splatter" movie. The most that I can say within this review is that even though most splatter films often depict all sorts of extreme violence, cruelty to innocents, and emotional torment, there doesn't seem to be nearly as much emphasis on making the suffering of the victims linger on endlessly, even monotonously. In the majority of horror-films, even scenes where the villain/monster seeks to make the victim suffer seem to come to a definitive end. One of the nastiest tortures in cinematic history appears in 1934's THE BLACK CAT, where Lugosi's Verdeghast flays Karloff's Poelzig-- but though the audience knows that the suffering must seem like an eternity for Poelzig, it certainly doesn't seem so to the audience-- in contrast with any of the torture-scenarios in SAW.

WRONG TURN 4 and 5, according to Wikipedia, part company with the first three films in establishing a new origin for the hillbilly clan, called for the first time "the Hillickers." The three recurring mutants of the previous films-- Three Finger, Saw Tooth, and One Eye-- are being held in captivity, along with various other hick-mutants, in a West Virginia sanatorium back in 1974. The deformed hillbillies break free from confinement and slaughter all the doctors-- and then, supposedly for the next 20 years, the Hillickers take up residence at the abandoned sanatorium, until a bunch of 2011 snowmobiling college-students are forced to seek shelter in the building.

I assume that some exigencies of location-shooting forced the filmmakers to stick the hillbillies in a setting as counter-intuitive as that of a snowbound nuthouse-- but that said, this is still a really stupid set-up. I'm not opposed to showing extreme violence to depict the nastiness of the villains, but as I said above, the butchery of the physicians just seems to go on and on, more tedious than terrifying. The same applies to the slaughter of the college kids, and none of the murders this time out is as interesting as the brutal one that begins the far superior WRONG TURN 2 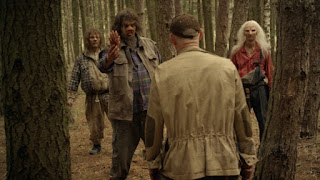 WRONG TURN 5 has just two things that make it a little better than Number 4. First its setting, though it's still not in the backwoods where hillbilly-menaces thrive, is a modern West Virginia city, where there's at least the potential for some conflict between the hicks and the moderns. Second, the film resurrects the character of "the Old Man" from the first and second films-- a non-deformed relation of the mutants-- and though he's not that interesting a character, he's played by Doug Bradley, a consummate horror icon for his role as Pinhead in the "Hellraiser" series. Playing a hillbilly version of Hannibal Lecter, Bradley gets a lot of juicy lines when he's taken prisoner by a local cop,. There's some minor fun to be had, watching him repeatedly predict doom for the cop and the teens helping her when his "boys" come to set the Crusty Cannibal free.  But at base Number Five has the same problems as Number Four: the "kills" are as dull as the hillbillies' wits, and O'Brien's script takes a little too much pleasure in putting his one-dimensional characters through the mill, at least for my taste.
Posted by Gene Phillips at 3:25 PM
Email ThisBlogThis!Share to TwitterShare to FacebookShare to Pinterest
Labels: diabolical devices (u), freakish flesh (u), superlative skills (u), the uncanny, weird families and societies (u)