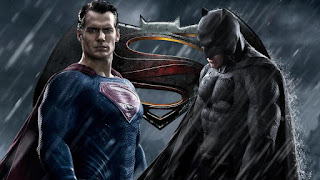 Before I geared up to review BATMAN VS. SUPERMAN: DAWN OF JUSTICE—henceforth “BVS”—I wrote this short history of both Batman and Superman in live-action cinema and television. Said history hits only the high points; the points that most pertain to Warner Brothers Pictures' current ambition to restructure its two best-known franchises for the prospect of launching a “DC Universe” in the film-world. This marks the company's first major attempt to take on the cinematic version of the “Marvel Universe,” cosmos-to-cosmos—or perhaps “cosmoses,” since the Marvel properties have been spread out over three different film-studios.

I’ve seen a number of comics-fans trounce BVS for continuing many of the visual tropes seen in the most recent live-action movie-versions of “the Dark Knight”  (all directed by Christopher Nolan) and “the Man of Steel” (directed by BVS’s helmsman Zack Snyder). Given that both the Nolan Bat-films and 2011’s MAN OF STEEL were both financially successful—and that BVS is a direct sequel to the earlier Snyder film—it was pretty much a given that Snyder would use most of the same visual tropes seen in the earlier Bat-Super films—gritty, hyperviolent action-scenarios, dingy and muted colors, and a mordant world-weariness that conflicts with the characterization of comic-book superheroes as vehicles of light-hearted escapism.

Many fans have complained about Snyder’s continued pursuit of these narrative strategies. What many have not realized is that this time they are being used not in opposition to the mythology of the superheroes, as was the case with the previous four films. I regard all of these as “hired gun” films, in the sense that the directors and writers involved were engaged to do nothing but to make viable franchises out of Superman and Batman respectively, not to make them function within any larger continuity..

But in BVS, the game plan has been changed. BVS is a “tentpole movie,” designed to launch other Warners projects like WONDER WOMAN and JUSTICE LEAGUE. Yet it’s not only that. BVS is also an attempt to build a cosmos by modeling it after a particular comic-book mythology. Even MAN OF STEEL, technically the precursor to BVS, did little more than reshuffle a few elements of the Superman mythos that were largely familiar to a mainstream audience. In the "universe" produced by Marvel Studios from the properties not sold to other movie-makers, the mythological structuring-event was the formation of the Avengers. Here, the event is the formation of the Justice League—but told as if it had come about because of the events of Frank Miller’s 1986 graphic novel THE DARK KNIGHT RETURNS. 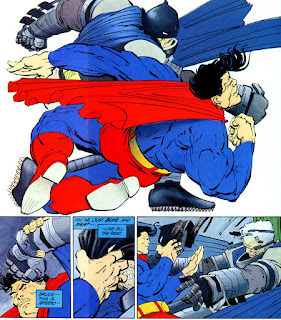 For some hardcore comics-fans (or maybe just me), this restructuring might suggest a delicious level of irony. Miller’s story of an aging Batman, coming to terms with a world that had rejected superheroes, was what Miller himself called a “brass band” funeral for the superhero genre. The same hardcore fans will undoubtedly note BVS’s many quotes from TDKR: the Batman-Superman conflict itself, a scene where a nuclear attack reduces Superman to a withered almost-corpse, before sunlight restores him, a quote from Batman to the effect that “We [superheroes] have always been criminals.” But the most important thing that the Terrio-Goyer script takes from TDKR is Miller’s extremely convoluted argument about the nature of power.

The “hired gun” films by Nolan and Snyder were not concerned with the pros and cons of power. Nolan’s stance is distinctly ultraliberal: his script turns the Bat-mythos inside out for the purpose of scoring political points against the perceived conservatism of that mythos. Snyder loosely emulates this pattern in MAN OF STEEL, but his pre-Superman work makes clear that he has never been as doctrinaire as Nolan. He apparently found just as easy to direct 300, whose theme concerned the glorification of a warrior-clan’s power, as WATCHMEN, whose storyline interrogated the power-aspects of the superhero fantasy.

I won’t dwell on the plot of BVS, though I’ll point out that ever since 1992’s BATMAN RETURNS it’s become routine for big-budget superhero flicks to force too many irons into the fire, and that BVS’s plot is no worse than the chaos of AVENGERS: AGE OF ULTRON.  BVS must juggle not only the intimations of other superheroes in the world, but three separate plots that account for Batman’s animus toward Superman, Superman’s mutual hostility, and villain Lex Luthor’s confusing scheme to manipulate the two heroes against one another—while at the same time said villain also plots to unleash a second menace, Doomsday. This somewhat tacked-on subplot also derives from a famed comic-book narrative, the 1990s “Death of Superman.” However, the Doomsday sequence, and the death that results, don’t really concern the theme of power. Naturally I suspect that the hero killed at the film’s end will resurrect in his next film just as predictably as he did in the comic books. For all that I know, said resurrection may even be the key to the assemblage of the Justice League. 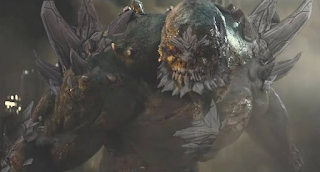 BVS does not explore exactly the same issues of power as Miller’s THE DARK KNIGHT RETURNS, but the film shows a Miller-like sense of power’s ambiguities. The Superman of Richard Donner and the Batman of Tim Burton are imposing presences, but they’re not scary. Despite the difference in the levels of power controlled by the two heroes, their use of it is visceral and unsettling, and very much in tune with the way superheroes of comics’ Golden Age were depicted: as holy terrors to evildoers. Early in the film, an African warlord holds a gun to Lois Lane’s head, to make Superman back off. Superman literally puts the man through a wall. The audience is obliged to assume that the warlord survives the hit, since nothing about his death is stated—but the abruptness of the violence will make most viewers feel as if the evildoer was reduced to a pulp by the Kryptonian’s inhuman power. And even though Batman is fully human, he’s seen shooting a vast number of henchmen in BVS, including a scene that’s a direct swipe from a similar one in TDKR, right down to Batman’s concluding phrase, “I believe you.”

At the same time, even though their power is fearful, the Terrio-Goyer script allows both of them moments of humanity, showing that they unleash violence only to protect others. In fact, the two heroes become enemies because each sees the danger in the other’s uncontrolled violence. The script misses the chance to say something meaningful about the nature of power and the issue of collateral damage, but it does show Superman’s guilt and regret when, as a result of his righteous actions in Africa, the local government’s re-asserts its power by slaughtering helpless people. Batman is more directly responsible for inciting violence for having placed a “bat-brand” on some of the crooks he captures: this brand at least causes said crooks being killed in prison. Yet the hero also shows some regret for his precipitate actions, at least by the film's end, where Batman threatens an imprisoned Luthor with the deadly brand—and yet, at the last moment, spares the super-villain from that fate.

Though some reviewers have caviled at the film for its splashy scenes of spectacular violence, I found Snyder’s spectacle-scenes somewhat more artful than those of the Nolan films. Nolan specializes in scenes of slick, high-octane violence; scenarios, that oppose their diegetical “reality” to the fantasy of billionaires who cruise around town in tricked-out military vehicles. A similar intellectual aridity pervades Snyder’s MAN OF STEEL, where both Superman and his Kryptonian foes have no more mythopoeic status than a weatherman’s reportage of a colossal storm. But in BVS. Snyder at least allows a few sparks of superhero symbolism to cut through the murk of sociopolitical determinism.  The interpolated subplot of Wonder Woman—who’s pursuing a course not related to the Gotham-Metropolis struggle—is of some help in this, though her rich mythology is barely suggested. Given the brevity of her appearances, I can't understand why any reviewers would claim that she 'saves" the film, though I think her non-costumed scenes outshine her costumed ones as far as communicating her Olympian poise. 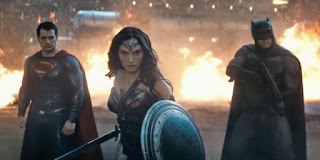 BVS is not by any means my ideal live-action chronicle of the first encounters of Batman and Superman, and the best that I can say for the principal actors—Affleck, Cavill  Gadot, and Eisenberg—is they generally acquit themselves well with what they’re given, though only Eisenberg really puts a definitive stamp  on his “manic Bill Gates” version of Lex Luthor For me scenes of head-scratching confusion probably outnumbered scenes of wonder and awe. And yet, the mere fact that the production chose to steal from the best, from Miller’s definitive Batman work, suggests that the new Warner-DC Universe might be able to formulate a superhero universe with its own unique tonality, rather than doing what a lot of DC comic books did to poor effect—simply copying the Marvel method of doing things.
Posted by Gene Phillips at 2:30 PM
Email ThisBlogThis!Share to TwitterShare to FacebookShare to Pinterest
Labels: combative adventures, the marvelous