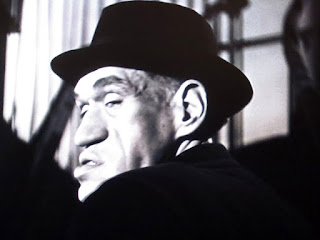 "What's Conover? No more than a symbol of the greed and cruelty and the lust for power that has set men at each other's throats down through the centuries. The struggle will go on, Watson, for a pearl, a kingdom, perhaps even world dominion...until the greed and cruelty has been burned out of every one of us, and when that time comes perhaps even the pearl will be washed clean again."-- Sherlock Holmes, PEARL OF DEATH.

In horror-film fan-circles PEARL OF DEATH had some influence beyond just being a good Sherlock Holmes film. PEARL introduced the moviegoing public to the persona of Rondo Hatton at a time when the unfortunate actor's acromegalic condition had progressed, giving him the appearance of a "real monster." This led to his very short career as a horror-film actor in four more films, including HOUSE OF HORRORS and THE JUNGLE CAPTIVE, prior to his untimely demise.

While re-screening PEARL, I gave a quick re-read to the Doyle short story "Six Napoleons," which is credited as a source for the screenplay. In my view it's a slight, gimmicky story that places a problem in front of Holmes' nose and then gives him plenty of time to solve it, with only one murder to spice things up. I liked PEARL's story quite a bit better, in part because the priceless Borgia Pearl, which is no more than a "MacGuffin" in the short story, becomes an element in the struggle between the stern yet beneficent Holmes and his corrupt adversary.

Giles Conover (Miles Mander) may be a bit of a road-show Moriarty, but he fits the more limited scope of this production. In any case Holmes talks about the villain in the same mythic terms that he applies to Moriarty, while the Borgia Pearl, the treasure which Conover seeks, is also infused with the aura of Wilkie Collins' Moonstone. Conover's resources are more limited than those of Moriarty, for though he sets a few thugs on Holmes and Watson in one scene, his only regular resources are female thief Naomi Drake (Evelyn Ankers) and the Hoxton Creeper (Hatton)-- and even then, director Roy William Neill keeps the Creeper offscreen for most of the story, so as to give his freakish appearance the maximum impact at the conclusion. That said, Conover pulls one Moriarty-like assassination trick, when he sends Holmes an anonymous gift, rigged to kill the detective.  The plot amounts to a situation akin to that of the short story, in which both the detective and his adversary seek a lost treasure, though in the film both of the seekers and the audience know the nature of the treasure. It's a good combination of thrills and ratiocination, and the film's sole weakness for me was the ease with which Holmes managed to turn the Creeper against his master.

Rathbone and Bruce are allowed to do more than simply go through the Holmes-Watson paces, particularly in a scene that establishes Watson's fierce loyalty to Holmes when the latter is subjected to public criticism. Holmes for his part has both some warm moments and some more prickly scenes, as well as waxing almost metaphysical in his final meditations on the folly of "greed and cruelty," and imagining some "time" in which even the bloodstained pearl "will be washed clean again."
Posted by Gene Phillips at 3:15 PM
Email ThisBlogThis!Share to TwitterShare to FacebookShare to Pinterest
Labels: diabolical devices (u), freakish flesh (u), the uncanny