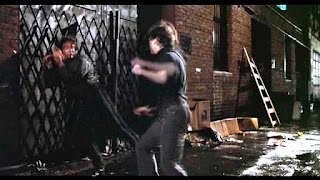 About five years after Abel Ferrara dipped his toe into the genre of slasher-films with 1979's DRILLER KILLER, he once more visited slasher-tropes in 1984's FEAR CITY, a film that might appear to fall more within the naturalistic domain. However, CITY is one of those rare slashers that remains in the uncanny domain in the same way as the killer of 1981's EYES OF A STRANGER, who also evinced a larger-than-life quality despite lacking most of the common tropes of slasher-killers.

Ferrara places his struggle within New York at the height of its 1980s "Sin City" reputation, focusing on the daily functioning of one of the city's sleaze districts. Ferrara and writer Nicholas St. John (a frequent Ferrara collaborator) depict unflinchingly the "dog eat dog" atmosphere of this milieu, in which everyone's out for a buck and even righteous black cop Wheeler (Billy Dee Williams) openly disparages the "dagos" and "guineas" who run the area's strip-joints.

Into this corrupt domain comes a new element, a man who attacks strippers with a knife, thus earning himself the awkward newspaper-nickname "the New York Knifer." The Knifer is given no backstory whatever, and he departs from many of the common tropes. He slashes his victims in order to watch them suffer, but doesn't invariably kill them, nor does he seem particularly turned on by their injuries. He shows no more affect than the mask worn by Michael Myers, and he attacks with the grace of a ballet dancer, stemming from his expertise in the martial arts.

Both the cops and the strip-joint managers are clueless in dealing with such an outre menace, and their first thought is that the Knifer is some sort of gangland killer. Only an ex-boxer, Matt Rossi (Tom Berenger), eventually sees the nature of the menace, and this seems to be because he himself suffers from a tormented past: having accidentally killed another boxer in the ring. Given inspiration by a Mafia don (Rosanna Brazzi), Rossi makes it his business, private citizen though he is, to track down the New York Knifer.

Unlike most slashers, this one culminates in a combative struggle between the hero and his foe, in which the skills of the Western boxer are pitted against those of the Eastern martial arts. I saw one imdb reviewer who deemed the final fight "one-sided," but that's not what I saw: the nameless Knifer scores quite a few good hits on the boxer, and it's certainly by no means certain that Rossi will win until the final verdict.

Ferrara would became well-know as a creator devoted to exploring the worlds of venality and corruption, as in 1992's BAD LIEUTENANT and 1996's THE FUNERAL. This early work isn't nearly as extreme as his later works, but it serves as a bracing precursor of sleaze-to-come.

ADDENDUM: Though none of the characters in FEAR CITY tend to make any ethical or spiritual analyses, the St. John script seems to suggest that most of the sins seen and sinners seen in the film are petty and thus unable to deal with a serious threat. Ironically, Rossi's implication in a far more monumental sin-- that of manslaughter-- seems to confer upon Rossi the spiritual power that's needed to combat a deeper metaphysical threat.

Posted by Gene Phillips at 3:48 PM
Email ThisBlogThis!Share to TwitterShare to FacebookShare to Pinterest
Labels: combative dramas, perilous psychos (u), the uncanny