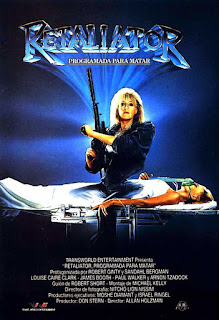 THE RETALIATOR, also frequently known as PROGRAMMED TO KILL, is largely a wasted opportunity in every way. It's not even a lively junky action-film.

The blame can be equally shared by long-time director/film editor Allan Holzman and writer/co-director Robert Short. RETALIATOR is just a basic "Frankenstein" story transferred to the arena of international terrorism, and Holzman and Short bludgeon their one idea into taking the dullest, most predictable path possible.

There's some potential in the character of Samira (Sandahl Bergman), an American expatriate who for reasons unknown has become allied with a terrorist group in Greece. Her motivations may be purely romantic, since early on she's seen sucking the face of the head terrorist, who sports the Islamic-sounding name "Hassim."  The CIA decides that Samira is the perfect subject for a cyborg-program, so they send agent Eric Matthews (Robert Ginty) to Greece to capture the female terrorist and bring her back to the U.S. Matthews only partly succeeds, for Samira fights back, knifing him, so that he's forced to kill her and bring back nothing but her dying body. This doesn't deter the CIA in the least, for they rebuild her as a cyborg killer and send her back to Greece, where she easily infiltrates the terrorists and kills them all. Immediately after that-- with no trigger to speak of-- Samira suddenly turns on her handlers and kills them. She then manages to return to the U.S, and begins killing off everyone involved in the project, as well as pursuing Matthews and his family.

There's a fair amount of shooting, but the script doesn't bother to take advantage of Bergman's athleticism, as seen in her best-known fantasy-film, 1982's CONAN THE BARBARIAN. Despite her cyborg enhancements, Matthews manages to kill her with the use of a bulldozer, in a scene even more risible than a similar slo-mo death in the intentionally comic AUSTIN POWERS.

About the only entertainment value of this loser is that of watching for an early appearance of later action-star Paul Walker.
Posted by Gene Phillips at 4:31 PM
Email ThisBlogThis!Share to TwitterShare to FacebookShare to Pinterest
Labels: combative adventures, the marvelous