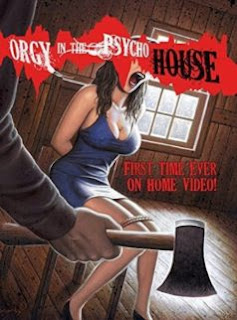 PSYCHO's long shadow envelops CIRCUS just as it does many other 1960s horror films. I imagine that other low-budget grindhouse productions ransacked the Hitchcock oeuvre before this one, but I have to give credit to writer-director Henri Pachard-- in his third film before he went on to a long. long career in hardcore flicks-- for sticking somewhat close to the PSYCHO pattern.

The "psycho house" is a farmhouse out in the bleak countryside, inhabited by an older, unnamed woman (billed as "Mom" on imdb), her adult son Jaimy, and a weird caretaker, Yenos, who's seen axing some unfortunate woman to death in the film's first few minutes.  Mom's brother Louie, a coke dealer, takes it into his head to come visit, bringing along two skanky ladies, implicitly involved with him in making erotic films. Mom receives her visitors with ill grace, and the stage is set for indiscriminate murder, interspersed by either visual fantasies about sexual encounters or Louie trying to gross people out in one way or another. Louie's the first victim of the mystery killer-- kept decorously off-camera as Louie is knifed to death-- and the girls are next.

Despite the clumsy sequences with the caretaker, clearly Pachard wants the viewer to suspect weak, passive-looking Jaimy. But, big surprise, it's Mom doing the killings. It's really not much of a surprise, since early on some non-specific sexual activity between mother and son is indicated, and a final sequence glosses this. After having killed all the intruders, Mom then spends several minutes applying a dress and makeup to Jaimy. Then the film ends, making clear that this time, "Norma," not "Norman," is really the guilty party.

IMDB reviews assert that this probably wasn't the full film, not least because there's not much real-time bump-and-grind. However, there's enough perversity on display that CIRCUS almost seems like the sexploitation version of the old saw about vaudeville-- i.e., if you don't see your fetish on display, just wait a minute and there'll be another one.

Posted by Gene Phillips at 3:33 PM
Email ThisBlogThis!Share to TwitterShare to FacebookShare to Pinterest
Labels: perilous psychos (u), the uncanny