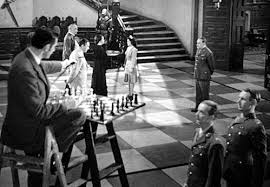 Of all of the Universal films featuring the Great Detective, SHERLOCK HOLMES FACES DEATH sports the oddest title. While a lot of Conan Doyle’s Holmes stories pose no peril to the sleuth, most if not all of the movies under this heading bring Holmes into imminent risk of his own life. Given that fact, one could almost imagine the Sherlock of FACES being forced to duel an angel of doom, or some similar specter. But FACES doesn’t even have a phony ghost, just a passing reference to an alleged spirit in the ancestral manor of the impoverished aristocratic family, the Musgraves.

Odd title aside, FACES has the distinction of being a more entertaining mystery than the Doyle story on which it’s loosely based. The case of Doyle’s “The Musgrave Ritual” is narrated to Doctor Watson by Sherlock long after the events of the case occurred, which by itself takes away some of the immediacy. Holmes’ client, a stuffy lord named Musgrave, approaches Holmes in reaction to what might be called “servant trouble.” Musgrave dismisses his butler Brunton for messing around in Musgrave’s papers, including a copy of a family catechism, the “ritual” of the title. Both Brunton and another servant disappear under mysterious circumstances, and Sherlock’s solution to the puzzle involves using the ritual to unearth an ancient English treasure.

Politically speaking, the short story pretty much adheres to the social status quo. Not so FACES. In keeping with the World War Two setting, the events at Hurlstone, the manor of the Musgraves, actually end up leveling the playing field between the classes. One change from the original story, made explicitly to appeal to wartime audiences, is that the manor has been temporarily converted into a barracks for soldiers who have returned to England to convalesce. This plot-thread doesn’t have any great impact on the mystery’s solution, but it does give the film an excuse to involve Doctor Watson with the Musgrave family. Of much more social consequence is the film’s use of the old chestnut, “young heiress wants to marry outside her class.” Thus, in place of one grumpy, landed aristocrat, we have three relatively impoverished high-class siblings, Snobbish brothers Geoffrey and Philip oppose sister Sally’s desire to marry one of the lower classes, who’s not even a native Britisher, but one of those Yanks involved in the war effort.

Though the butler Brunton still plays a key role in the mystery, the film starts off with a more momentous event: a local doctor is attacked, albeit non-fatally, on the grounds of Hurlstone. Did one of the traumatized patients go amok? But this is never really a serious possibility, especially when one Musgrave brother dies, and the other follows not long after. In fact, Philip dies in such a way as to be strongly associated with Sally-- his dead body is found in the trunk of a car when Sally’s driving it. However, given that Sally is presented as a sympathetic figure—not least because she’s marrying an American swain—Sally is also not even briefly portrayed as a possible culprit. However, the course of Sherlock’s investigations bring him into contact with the Musgrave Ritual, though in this go-round, the catechism is much more elaborate than in the short story. However, the ritual’s purpose remains the same: to pave the way to an ancient treasure, which is also the motive behind the murder. And in contradistinction to the story, where the rich are made richer by the uncovered treasure, Sally proves herself a woman of her time by casting aside the riches when it’s indicated that their use would harm the lower classes. Indeed, the film ends with Sherlock singing the praises of a new Samaritan ethic, implicitly born from the travails of the war, that will make it impossible for men to ignore one another’s suffering.

Despite some interesting visual touches—a chamber whose tiles are used as a giant chessboard, and a lightning-bolt that coincidentally causes chaos during Sally’s reading of the Musgrave Ritual—FACES is in every way a naturalistic Holmes-excursion.

Posted by Gene Phillips at 1:38 PM
Email ThisBlogThis!Share to TwitterShare to FacebookShare to Pinterest
Labels: bizarre crimes and crimefighting (n), the naturalistic