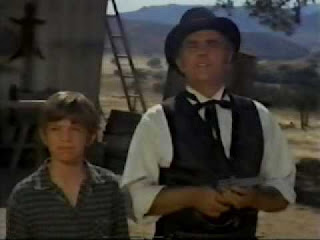 I've usually found the western teleseries LANCER to be a weak-sauce version of BONANZA (middle-aged patriarch works a ranch in the Old West with his adult sons). That's why I was surprised to find that one 1969 episode of the series provided one of TV's better "weird westerns."

The trouble begins not with the Lancer family (consisting principally of patriarch Murdoch and his sons Scott and Johnny) but with one of their neighbors, Silas Hacket, who with his young son Jeremy works a small nearby ranch with a cornfield (and the titular scarecrow, though it doesn't get a lot of visual emphasis). Silas falls ill and passes away, but not before making the eerie claim that he wills his land back to the devil, who gave it to him. The Lancers take young Jeremy under their wing, assuring him that they won't honor such an extravagant claim and that the ranch will become the youth's properly.

However, a newcomer (Pat Hingle) arrives at the Lancer ranch, ushered in by a blistering wind that the newcomer himself calls "infernal." He introduces himself as Absolem Weir, and presents evidence that he has a lien on the property. Murdoch promises to have the local lawmakers investigate Weir's claim, but clearly his sympathies are with Jeremy. Further, Absolem-- who perhaps borrows his first name from the rebellious son of Biblical king David-- seems uncannily omniscient about everyone at the Lancer ranch, particularly Johnny, who has a quasi-criminal past as a gun-for-hire. Absolem even displays the Batman-like talent for disappearing whenever someone's looking away from him.

While the lien is under investigation, Absolem takes it upon himself to visit the ranch in question, and he seems to be exert a charismatic influence upon Jeremy-- perhaps because Jeremy needs a new father-figure. However, Absolem's conversations-- in some cases taking place in that dismal cornfield with its scarecrow-- seem to focus more on tempting Jeremy to cross over to some darker existence. He shows off an ability to handle a gun, and though he doesn't exhibit any supernatural talents as such when he and Johnny come to blows, there's a peculiar moment wherein Weir spitefully spooks Johnny's horse by uttering a cougar-like cry.

Despite all of these devilish suggestions, the Lancers' investigation indicates that Weir's lien is phony. This disclosure leads to a concluding gun-battle between Johnny and Weir. Yet scripter Samuel Roeca and director Marvin Chomsky (the latter best known for three STAR TREK episodes) still manage to keep a sense of the unfathomable. The two men fire at each other from cover, and Johnny's fire hits not Weir but the implacably standing scarecrow. When the other Lancers show up, Weir has simply disappeared, this time for good, as the land is ceded back to the rightful owner.

It's not a perfect episode. Too late in the story, Johnny remembers a legend about the devil wanting to "grow souls" in some barren piece of land, a legend which would've been more effective toward the beginning of the narrative. But it's certainly a better metaphenomenal western than seeing Hoss Cartwright dress up like the Easter Bunny.
Posted by Gene Phillips at 4:10 PM
Email ThisBlogThis!Share to TwitterShare to FacebookShare to Pinterest
Labels: phantasmal figurations (u), the uncanny