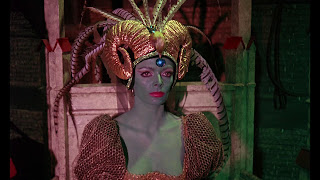 I'll get the expected complaint out of the way first: that it's a shame that a movie starring Christopher Lee, Boris Karloff and Barbara Steele doesn't boast a script worthy of the actors.

To be sure, Steele has such a small role that I suspect that she was only engaged for a few days, so maybe her greater participation was off the table from the get-go. But both of the characters played by Lee and Karloff share the stage quite a bit with viewpoint-character Robert Manning (Mark Eden), so there's no excuse on that front.

ALTAR's biggest failing is that Robert is a bland lead, given a bland mission. His brother Peter disappears while traveling for the brothers' antique-dealing business, and the only clue is a note that leads Robert to a small English town called Greymarsh. Robert checks out a mansion occupied by an urbane fellow named Morley (Lee) and his cute niece Eve (Virginia Wetherell), but neither of them can adequately explain the note's provenance or Peter's disappearance. No one in Greymarsh gives Robert any help, though strange old duck Professor Marsh (Karloff) gives the young man lots of background on the town's supernatural history. In particular, the Morleys had a witch in their family centuries ago, one Lavinia (Steele), a green-skinned, horn-headed sorceress seen only in visionary sequences.

Robert, with the aid of Eve, continues stumping around trying to solve the mystery, though the character as written never seems all that torn-up by his brother's disappearance, or even being told (by Michael Gough's creepy butler-type) that Peter is dead. Robert himself has visions in which he sees his brother being judged by Lavinia and her costumed cultists, after which Robert expresses total ignorance of all this occult business. Professor Marsh is happy to toss out tidbits about Pan and Herne the Hunter, but the script doesn't really have much to offer in terms of pagan lore-- even though Chris Lee would play a slightly similar type of character five years later in another pagan-horror film, THE WICKER MAN.

In the end (remember those SPOILERS), there's no real witch, only Lee playing at being a warlock, and using some very unlikely hypnotic techniques to control people's beliefs about a recrudescent Lavinia. Only at the end is there a small suggestion that Lavinia might be real. Lee, stranded on the roof of his burning mansion, seems to be surrounded by the image of the green-fleshed sorceress, while on the ground Robert and Eve react as if they too are seeing this apparition. But since both of them have been somewhat under Morley's mesmeric aegis, it's also possible that they're just seeing what Morley wants them to see. The scene seems to be more of a last-minute "gotcha" than a serious reversal of the story's main thrust about mysticism-via-hypnosis.

Lee and Karloff definitely give their thinly-conceived roles far more gravitas than the parts deserve.

Posted by Gene Phillips at 3:12 PM
Email ThisBlogThis!Share to TwitterShare to FacebookShare to Pinterest
Labels: enthralling hypnotism and illusionism (u), phantasmal figurations (u), the uncanny, weird families and societies (u)