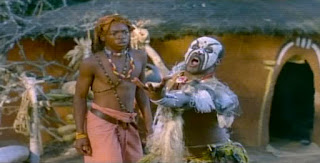 
The most interesting thing about PANGA, aside from racking up another decent if unexceptional Chris Lee perf, is that it was retitled CURSE III; BLOOD SACRIFICE, in response to the use of the "CURSE' title for two earlier but unrelated films. Of the three, PANGA's the only one that actually involves a literal curse.

In 1950's Africa, Geoff Armstrong and his pregnant wife Elizabeth oversee a sugar-cane farm. Geoff has been in Africa long enough to know the ways of the tribes, but Elizabeth is woefully ignorant, while her sister Cindy and her husband Robert are even worse. Cindy and Robert interfere with a witch doctor's ritual, which involves sacrificing a goat following the death of a tribal child. Elizabeth backs up her sister and saves the goat, but the witch doctor curses her and her family. In due time a supernatural sea-beast, incongruously armed with a machete, begins preying on the Armstrongs. Since Elizabeth is the viewpoint character, she lives after the others are killed off, partly due to the aid of local white doctor and magical expert Pearson (Lee).

Direction is competent but generally boring. Toward the end, Pearson is suspected of being involved in the killings, so he tells Elizabeth an unrelated story about how his sister slept with a Black African. The sister's pregnancy resulted in a half-black child that died, and somehow this also called forth the death-demon because no one sacrificed a goat in that instance, either. This backstory adds nothing to Pearson's character and is apparently thrown in as a last-ditch reminder that hey, colonial Europeans did some bad things to Black Africans. But since the story starts off by constructing Elizabeth as a well-meaning naif, this gesture toward real-world relevance is pathetic at best.
Posted by Gene Phillips at 3:35 PM
Email ThisBlogThis!Share to TwitterShare to FacebookShare to Pinterest
Labels: the marvelous