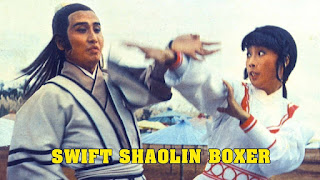 Unlike some stars of Hong Kong kung-fu films, Angela Mao-- probably the best-known female representative of the genre in the United States-- didn't make many films with metaphenomenal content. Moreover, of the few that had such content, some weren't even movies that featured Mao in a starring role, as with both ENTER THE DRAGON and BANDITS, PROSTITUTES AND SILVER.
SWIFT SHAOLIN BOXER is an exception to this trend, for Mao is the featured character and gets the best fights in the story, despite the presence of the iconic Lo Lieh as a villain. However, I can't call it a welcome exception, given that it's a piss-poor story comprised of little more than jumbled set-pieces-- which is probably why it barely has any current online reviews.

In yet another indeterminate medieval-Chinese setting, Mao plays Chao Lung, a woman who helps run a tavern, using her fighting-skills as the tavern's "bouncer." She's eventually revealed to be an agent of the Emperor, who is aware of a rebel movement championed by Lo Lieh's character. The incoherent film diverges from Ms. Lung to show two other warriors passing weird tests of their kung-fu skill. One man, identified on some sites as "Emerald Headband," enters some sort of temple (maybe this is the alleged "Shaolin" connection?) and fights a gang of boy acrobats garbed in gold costumes. Elsewhere, in some rural setting, a fellow named Ho Kun (Barry Chan) triumphs over four separate opponents, including a female fighter, possibly essayed by another kung-fu diva, Chia Ling, who's billed as having a cameo. When Ho Kun succeeds in his fourth test, the woman tells him he's now fit to serve the Emperor.

However, there are agents of Lo Lieh about, and one of them kills Emerald Headband, playing a flute that causes the victim to scream and die. Though this is a pretty handy super-power, we never see it again, though at least one other agent of the Emperor is also slain by the mystery assassin.

Ho Kun makes his way to Chao Lung's tavern in order to contact her, so that they can jointly investigate the murders. Chao Lung doesn't like Ho Kun, and they fight until interrupted. Later they make amends and Chao appoints an unnamed young guy to guard over Ho Kun. The villain's agents trap Ho Kun in a cage, but Chao and her buddy break him free. There's also an incomprehensible scene in which men in zombie makeup are either real or fake hopping vampires. Either way, they have nothing to do with the plot.

Finally, out of nowhere, the villain confronts Ho Kun in a countryside studded with colorful parasols.  They fight, and just as Chao Lung and her aide show up, Ho Kun slays the villain. However, Ho Kun has only battled the revolutionary with the idea of taking over his operation, so Ho Kun promptly attacks the two loyal servants of the government. Maybe the traitor can't use his flute's magic under such circumstances, but the flute has weapons inside it, like a spear-point and a chain.  Nevertheless, Chao kills Ho in the end, though he expresses some deathbed regrets for what might have been.

In the American movie biz, filmmakers who are good at special FX or stunt coordination sometimes graduate to the director's chair, where they usually emphasize kinetic set-pieces at the expense of narrative. Since the average HK martial arts film isn't nearly this incoherent, I'd theorize that something of this sort happened with SWIFT SHAOLIN BOXER. Still, though it's merely a bad movie without rising to the "so bad it's good" level, Angela Mao's fighting-skills lift the flick out of total worthlessness.
Posted by Gene Phillips at 2:11 PM
Email ThisBlogThis!Share to TwitterShare to FacebookShare to Pinterest
Labels: combative adventures, the marvelous