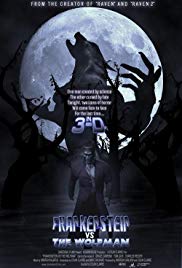 
Here's the tagline from this 18-minute short:

"Tonight, two icons of terror will come face to face-- for the last time!" 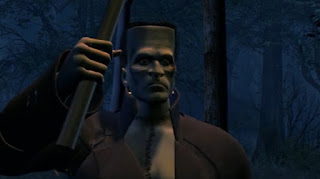 Well, the short does OK in rendering a somewhat iconic version of the Frankenstein Monster. True, one can cavil about the idea that the Monster has somehow managed to gain custody of his maker's castle and can go into town just like any other Carpathian citizen. But he looks good, a bit reminiscent of the Robert deNiro version as well as the classic Karloff creation, and he has a good characterization, reminding one of the self-educated being from Mary Shelley's novel. Though a solitary type, the Monsters befriends three orphan kids after one of them points out that they're like him in having no parents. He also ends up saving them from the other monster of the title. 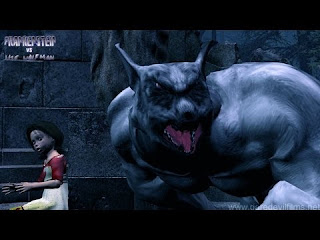 And that's why the short's hype is not so accurate. This is no "iconic Wolfman," it's just a dime-a-dozen werewolf. Yes, there's the expected werewolf lore, and at one point his mortal alter ego is called "Talbot." But whereas the Universal classic crossover fleshed out both the Monster and the Wolf Man, this time the furry fellow gets the short end of the stick.

The home-computer animation is not very good, but it's a nice script and it has its Universal-loving heart in the right place.
Posted by Gene Phillips at 11:53 AM
Email ThisBlogThis!Share to TwitterShare to FacebookShare to Pinterest
Labels: combative dramas, the marvelous