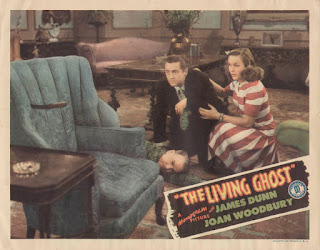 
One year before William Beaudine directed THE APE MAN, his first Bela Lugosi cheapie for Monogram, the director turned out this comedy-mystery with a minimal fantastic content.

After a rich patriarch disappears, his family suspects kidnapping. A friend of the family brings in oddball private detective Nick Trayne (James Dunn) to investigate. Since Nick has moved on from being a detective, having become a "professional listener" who gives ear to people's problems for dough, the old friend encourages the family's cute private secretary Billie (Joan Woodbury) to give Nick a little ribbing so he'll catch the shamus bug again. Nick lets himself be talked into the case, and joins the family-- not nearly as eccentric as one usually finds in horror-comedies-- at their country house. But before Nick finds out much of anything, the missing man turns up-- not dead, but a "living ghost" in that he seems to be in a zombie-like state of unresponsiveness.

The mystery part of the film is efficient but forgettable, and it seems likely that the filmmakers were largely banking on the sparks between Dunn and Woodbury to sell the film with B-movie audiences. Both actors play their limited parts with vivacity, though Dunn's smart-ass dick gets a bit tiring at times. As for supporting players, only Minerva Urecal distinguishes herself as a would-be mystical type.

In terms of the metaphenomenal content, a consulting doctor gives Nick a lecture on the scientific means by which the rich man's will has been paralyzed. Though the explanation may well be nonsense in a scientific sense, the gist within the movie is that the method of "zombie-fication" is something within the bounds of science, slightly extended, so that it fits into the category of the uncanny. Neither the "zombie" nor its creator are particularly compelling, which leaves the acid-tongued detective in the position of center stage.

The film does include with a bit of pre-marital byplay that would be verboten today. Early in the film Nick promises to paddle Billie for her mockery if given the chance, and when she agrees to marry him at the end, she duly receives her punishment-- also in the end. I suspect that any adults watching the film in 1942 would have regarded the assertion of male privilege as nothing more than a joke.


Posted by Gene Phillips at 3:12 PM
Email ThisBlogThis!Share to TwitterShare to FacebookShare to Pinterest
Labels: diabolical devices (u), the uncanny