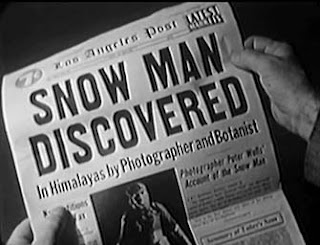 
THE SNOW CREATURE, one of the first "Yeti" films, is also the last of three low-budget SF-films on which director W. Lee ("brother of Billy") Wilder collaborated with his son Myles Wilder (though the two also worked on other, non-SF projects). Both PHANTOM FROM SPACE and the similarly titled KILLERS FROM SPACE are far more watchable, though CREATURE gets a few points for not being a total ripoff of its main influences, 1933's KING KONG and CREATURE FROM THE BLACK LAGOON, which appeared in theaters about six months before Wilder's Yeti.

Whereas the explorers of CREATURE are looking for their fishy quarry, narrator-and-viewpoint-character Parrish undertakes his expedition to the Himalayas looking for rare botanical subjects. His only companions are another American, a photographer named Wells, and several Sherpas, implicitly Tibetan though they are played by Japanese actors. Only three of the Tibetans are named: the leader Subra, his wife Tala, and his brother Leva.

After a few days of monotonous travel through the Himalayan snows, a Yeti appears at Subra's house and steals Tala. Leva overtakes the expedition and relates this story to Subra, who believes it implicitly. He asks the two Americans for help, but neither of them believe in abominable snowmen, and they decline to go Yeti-hunting. In one of the film's few original touches, Subra hijacks the expedition for that purpose, forcing Parrish and Wells to go along if they don't want to be left behind to freeze in the snows.

Though the Americans try a few tricks to take control of the situation, Subra heads them off and the group finally comes across evidence of a Yeti's passage: the prints of his "big feet" in the snow. However, there's no proof that the Yeti they're tracking has Tala in his possession, though the group does find one of Tala's shoes. However, Tala is never seen again in the movie, nor is there more than circumspect acknowledgment that she's been abducted to help breed more Snow Creatures. Wells shows himself to be a minor-league Carl Denham, asking Subra if he might want to profit from any creatures they find, rather than simply killing them. Parrish can only think of making a new discovery that will benefit his career, though even before seeing any snowmen, he's oddly certain that the creature is just some kind of animal (contradicting his narration about their being a "crude civilization" of Yetis).

The expedition follows the tracks to a series of caves, and they find not one but three Snow Creatures-- an adult male, an adult female, and a child-- though the latter two are barely seen. Since Wilder's script has no use for them, the scripter resorts to a peculiar device to get rid of them. When the male Yeti sees the outsiders, he tries to bring down the ceiling on them, but only succeeds in killing his own family and stunning himself. Parrish and Wells steal back their guns from Subra, forcing all of the Sherpas to give up the search for Tala, though it's possible that Subra believes her to have died in the cave-in. However, thanks to a handy syringe filled with a knockout drug, Parrish can keep the Snow Creature unconscious as the Sherpas drag him back to the nearest city. Once there, big-hearted Parrish declines to press charges against the rebellious Tibetans, but there's a new source of conflict. Wells thinks they should exploit the creature for profit, while Parrish simply wants him examined by scientists, for which purpose he sends the snowman back to the States in a "refrigerator unit." Strangely, unlike most noble scientists in 1950s films, Parrish is utterly indifferent to the Creature's possible human status. In a later scene Parrish reaffirms that it's only an animal, though he does so in part to allay Wells' attempt to publicize the new find as a "snow man."

The sketchy debate about the Creature's status ends when the snowman breaks free of its prison in a California city. The Wilder script seems to agree with Parrish: there are absolutely no scenes to suggest that the monster can think or even express puzzlement over his surroundings. The Snow Creature is just a primitive libido on the loose, for, apart from fighting back against police, his only action is to attack women in two very discreetly handled scenes. Finally, Parrish is able to advise the police to look for the beast-man down in the sewer system, at which point the cops eventually overtake and kill the monster with a minimum of fuss.

Though it may be presumptuous to do so, I can't help expressing that the absolute disinterest of both of the Wilders in the creature's mentality signals their lack of investment in the making of SF-films about monsters and aliens. Father and son worked on three other films together, two of which have metaphenomenal content even though they don't qualify as mainstream SF. After that, Myles Wilder had a long career in episodic TV-- including another "caveman," KORG 70,000 B.C.-- and W. Lee only directed a few more films, ending his career with yet one more fantasy-flick, THE OMEGANS.

ADDENDA: I considered the possibility that the Yeti might reflect attitudes of 1950s Caucasians toward so-called "savage races." However, there's not much to back up this sort of sociological reading, particularly since the Yeti people prey most of all upon "persons of color." It seems more likely that the ham-fisted script conceived of the snow creatures as a menace to all humanity, like nasty Cro-Magnons still trying to get one up on those intruding Neanderthals.
Posted by Gene Phillips at 3:47 PM
Email ThisBlogThis!Share to TwitterShare to FacebookShare to Pinterest
Labels: the marvelous