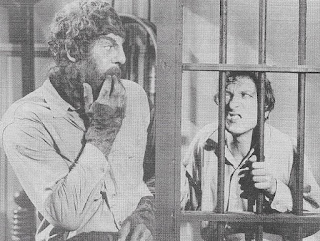 
I'd tend to agree with the dominant online opinion that this Bowery Boys film probably owes more than a little to the previous year's successful monster-comedy ABBOTT AND COSTELLO MEET FRANKENSTEIN. In that film, Glenn Strange played the Frankenstein Monster, and a mad scientist working for Count Dracula wanted to transplant Lou Costello's simple brain into the monster's skull. Here, a mad scientist named named Druzik (Alan Napier) has control of a hairy brute named Atlas (Strange again), whom Druzik wants to improve upon. But instead of using the tried-and-true brain-transplant mode, Druzik employs lots of Frankensteinian elecrtical arcs to effect a personality-transfer-- and thus Atlas's brutish body comes to be inhabited by the timid consciousness of Sach (Huntz Hall), the resident dingus of the Bowery Boys.

Perhaps so that filmmakers could keep their comedy's plot a little distinct from that of the A&C film, MASTER MINDS starts out with a fantasy-trope that's largely irrelevant to the main story. Sach eats too much candy and somehow gains the power to make accurate prophecies. His leader Slip (Leo Gorcery) and the rest of the middle-aged "boys" immediately set Sach up to be a carnival fortuneteller. Druzik sees the act and for some reason thinks that a prognosticating man-monster might prove useful, so he and his aides kidnap Sach. Once the personality transfer takes place, "Sach.," now in the body of a behemoth, seeks out his old pals and eventually leads them to Druzik's laboratory, resulting in assorted silliness.

In comparison with some of the earlier Bowery Boys adventures into the supernatural, this one benefits from good casting, particularly with Napier as the silver-tongued scientist, whose aides include Skelton Knaggs and Jane Adams, both of whom had worked alongside Strange in 1945's HOUSE OF DRACULA,  But the most interesting aspect of MINDS is how well Huntz Hall throws himself into playing the ferocious Atlas once the monster's mind has been placed in Sach's body. Strange also has a little fun playing the part of the timid Sach despite his gangling form, but Hall doesn't try to mug in his role, although it's pretty much what one would expect of such light comedies.  Huntz Hall was certainly not what anyone call a versatile actor, but it's refreshing to see him step, however briefly, outside his usual routines.
Posted by Gene Phillips at 2:58 PM
Email ThisBlogThis!Share to TwitterShare to FacebookShare to Pinterest
Labels: the marvelous