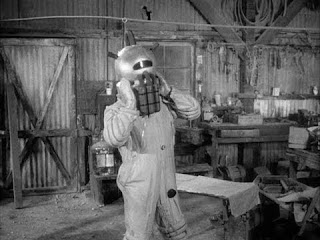 I recently reviewed W. Lee ("Brother of Billy") Wilder's SNOW CREATURE, the last of the pure-SF films he did with his son Myles. I had already looked at the Wilders' second collaboration, KILLERS FROM SPACE, so I decided to get round to the first, PHANTOM FROM SPACE.

PHANTOM seems to have provided the template for SNOW CREATURE, insofar as both films take a pseudo-documentary approach to the subject matter. With even less set-up than CREATURE, a mysterious space-suited man begins wandering around Santa Monica. The spaceman's presence interferes with radio broadcasts, which gets the local FCC reps into the investigation, and he kills a man, which brings in the cops. All three Wilder films seem to be aping the trend of 1950s SF-films to idolize "professional men" of any kind, whether cops, soldiers, scientists or government officials, but the Wilders show no awareness that the audience might like to see such characters given human traits in order to make them somewhat relatable.  Indeed, the lead cop in the investigation, a fellow named Bowers, might be more likely to alienate audiences. The alien kills his victim when the latter attacks him, and the two witnesses-- the man's wife and his neighbor-- are automatically disbelieved when they tell their story of a man in a "diving suit," whose face seemed to be invisible inside the helmet. Bowers, on no evidence whatever, tries to float the idea that the neighbor killed the victim to get with the victim's wife. Not exactly Columbo here.

Eventually, even Bowers has to believe that something weird is going on. A night watchman also sees the diving-suit guy, and relates how the stranger ventures near an oil tank and blows it up through his mere presence. Again, where a lot of SF-films of the time would have faulted the various witnesses  for their xenophobia, the script is silent on this topic. The cops and the other investigators also encounter a pretty young lab assistant, Barbara. It's quickly established that she's married to another scientist, though their relationship has no greater significance to the story.

The alien-- called an "x-man" once or twice in the film-- has another property: whenever he takes off his spacesuit, he becomes invisible to human sight. At no time in the story is it made clear how the "Phantom" survives, even briefly, in Earth's atmosphere without his suit. Given that it's an important point in the story that the "x-man" needs to replenish his breathing-resources somehow, scripter Myles seems to be pretty cavalier in coming up with a gimmick where his alien can doff his suit whenever he pleases. The alien has no way of communicating with Earthmen, suggesting-- though it's never stated outright in the script-- that he's a castaway who didn't mean to land on Earth. Yet, aside from one scientist in the investigating group-- the fellow brought in to supply the technical exposition-- no one seems particularly bowled over by this contact with extraterrestrial life. Hazen's attitude toward his quarry often seems to be a mirror for the director's attitude toward the film: he just wants it to be over with.

Eventually, thanks to input from the military, the investigators figure out that their visitor can be tracked by his radioactivity. However, the spaceman foils them by taking off his suit and disappearing. Hazen and company take the suit with them back to their HQ at Griffith Observatory, and, unbeknownst to them, the alien stows away in one of their cars. At his first opportunity, the Phantom regains his suit and takes Barbara prisoner. Though he rips her lab-coat once, his main motive seems to be trying to communicate, attempting to establish a code by making rhythmic tapping sounds. However, the scripter is too impatient to deal with how an intelligent castaway might try to establish communication, and so the alien's efforts are interrupted and he's on the run again. At the anti-climactic climax, the alien's breathing apparatus is destroyed and the Earthmen use ultra-violet lights to foil his invisibility-- at which point he takes a fall and dies.

I can see why some SF-fans like this better than Wilder's other SF-films, since there are a few scenes in which the Phantom is scientifically analyzed. However, I found these scenes to be marginal in their impact, when compared to their stultifying effect of the documentary-style narrative. Most Hollywood professionals of the period, whether they really liked SF or not, got the gist of the genre's appeal and successfully emulated it. In all three pictures, Wilder seems fundamentally at odds with the demands of the genre, as if he's trying as hard as possible to minimize the effects of his SF-boogiemen. Only in KILLERS FROM SPACE, despite all of its problems, are the monsters even slightly memorable.

Posted by Gene Phillips at 2:46 PM
Email ThisBlogThis!Share to TwitterShare to FacebookShare to Pinterest
Labels: the marvelous