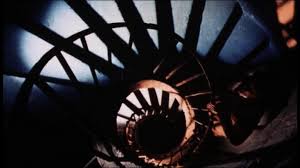 Mario Bava’s mid-sixties exercise in Gothic excess is no BLACK SUNDAY, though at times Bava--who collaborated on the script for KILL BABY KILL with two other authors-- seems to be attempting to turn some of the earlier film’s tropes on their respective heads.

Following various mysterious deaths in a small Carpathian town, a medical expert is called in to certify the causes of death. Young doctor Eswai is characterized only by his utter disbelief in the superstitions of the locals, who blame the deaths on a mysterious curse. The locals so resent Eswai’s intrusion that they rough him up once, but he makes an important (and sexy) ally: a young female medical student named Monica (Erika Blanc). Unlike Eswai she’s a liminal figure, having been born in the town though she went away to receive her medical education. To be sure, Monica never contributes any medical acumen to the case.

As in many such haunted European towns, the spectre of an aristocratic presence still endures. Here it takes the form of the aged Baroness Graps, though she makes only minimal appearances in the film’s first half, and her ultimate significance is not prefigured by the rambling script. Far more consequential are two other female figures: a little blonde girl named Melissa, soon revealed to be the ghost of the baroness’s long-dead daughter, and Ruth, a dark-haired witch-woman. Whereas in BLACK SUNDAY Bava utilized the familiar trope “good blonde female/ bad brunette female,” that dichotomy is reversed here, with the blonde ghost-girl being the source of the killings while the dark-haired witch-woman seeks to allay the ghost’s malice.

Compared to BLACK SUNDAY or even THE WHIP AND THE BODY, Bava’s visuals are undistinguished, except for one bracing scene in which Monica flees her ghostly nemesis down a winding staircase. Only in the final third of the film does the role of the Baroness become significant, as she’s revealed to be the medium that called forth the ghost-child’s vengeance.

In fact, the role of the Baroness is less interesting in itself than in the possible influence of KILL BABY KILL on a later classic horror-film. It’s long been hazarded that the second FRIDAY THE 13TH  film might have picked up some visual tropes from Bava’s 1971 slasher-precursor, TWITCH OF THE DEATH NERVE. Yet DEATH NERVE has nothing in its script that’s at all comparable to FRIDAY’s big reveal, that the killer is actually the aggrieved mother of a child who died as a result of the camp-supervisors’ neglect. KILL BABY KILL turns upon a very similar revelation: that the reason the Baroness has unleashed Melissa against the town is because some of the citizens trampled the girl to death during a raucous celebration.

There’s also a throwaway revelation that Monica’s life-history is a lie, and that she like Melissa is also one of the Baroness’s children. But both of them are such boring characters that there’s no tension to this reveal, just as Eswai’s conversion to the reality of the supernatural lacks any deeper resonance.
Posted by Gene Phillips at 11:30 AM
Email ThisBlogThis!Share to TwitterShare to FacebookShare to Pinterest
Labels: the marvelous