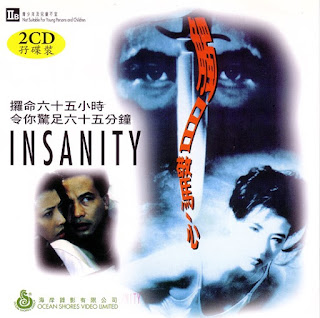 While clearing off some old tapes I came across this Hong Kong ghost-tale.

INSANITY is basically a "woman-in-peril" story crossed with a familiar Chinese trope in which houses can be haunted not by human ghosts, but by spirits of evil embodied in old artifacts. In this case, Mr. and Mrs. Wong have just acquired been married and have moved into a new house, so that everything looks rosy for them. However, Mister Wong's shrewish mother brings them a demonic-looking statue as a house-warming gift. Soon the young wife is being haunted by strange apparitions, including imagining that her OB-GYN turns into a slavering maniac.

There's a sloppily constructed subplot, in which the statue's evil is somehow linked to a cop (played by the best-known actor in the film, Simon "FULL CONTACT" Yam). The cop goes crazy, kills his wife, and then shows up on Mrs. Wong's doorstep. Apparently the statue doesn't have any power to do anything but aimlessly terrorize the young pregnant woman, so it summons the cop to assault Mrs. Wong.

The only distinguishing thing about this routine ghost-and-madman thriller is the way the script (written by the same fellow playing Mr. Wong) provides a rationale early in the film for a climactic decapitation.
Posted by Gene Phillips at 2:13 PM
Email ThisBlogThis!Share to TwitterShare to FacebookShare to Pinterest
Labels: the marvelous