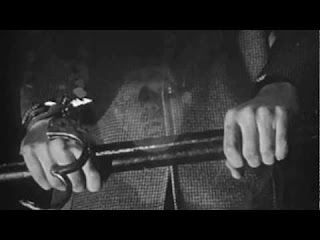 
W. Lee ""Brother of Billy" Wilder made three pure-SF films with scripts from his son Myles Wilder. These films, despite their many problems, are probably the only reasons anyone remembers either of the Wilders. The Wilders' other four collaborations-- three naturalistic thrillers and SPELL OF THE HYPNOTIST, the subject of my review--  are not often celebrated. Myles Wilder went on to do a lot of episodic TV, some of which is decent (like early GET SMART episodes) though hardly outstanding. W. Lee directed two non-Myles films with SF-content, THE OMEGANS and MAN WITHOUT A BODY, both of which I think deserve their obscurity, and most of W. Lee's efforts in other genres seem to inspire only apathy.

The film being reviewed has probably been exhibited most often with the title FRIGHT, but SPELL OF THE HYPNOTIST is a better title, especially since it's so hard to imagine even an impressionable child being scared by this double-Wilder outing. In addition, just as the Wilders seem generally under-invested in their three SF-films-- as if they could hardly summon the energy to care much about the motives of their snow creatures or their space-visitors-- SPELL conjures a little with the subject of reincarnation, but then dispels the supernatural from the world of the film. However, the Wilders do seem a little more invested in the titular hypnotist and his power to manipulate human minds.

There seems to be little question that the film was created to ride on the bestseller status of the 1956 book THE SEARCH FOR BRIDEY MURPHY. This purported non-fiction recounted how an amateur hypnotist put a housewife into a trace, resulting in her remembering a past life as an 1800s woman named Bridey Murphy. Paramount adapted the book in the same year, but given that SPELL comes out a month or so earlier than the paramount adaptation, I think I'm justified in assuming that the Wilders simply rushed an imitation of the bestseller out as quickly as possible.

SPELL's opening scene is simple but more viscerally involving than anything else I've seen from W. Lee Wilder. A demented murderer named Morley, having escaped police custody, gets atop a bridge and threatens to jump if the cops don't back off. Crowds gather to watch the spectacle, and among them is a psychiatrist, Doctor Hamilton (Eric Fleming). Hamilton commandeers a police bullhorn and uses hypnosis-techniques to lull Morley into a suggestible state, so that he can be captured. However, one other person in the crowd is affected by Hamilton's persuasive voice, a young woman named Ann Summers (Nancy Malone). Summers approaches Hamilton, and though he's taken with her good looks, he doesn't accept clients who come up to him on the street. However, he soon changes his mind and allows her to visit his office-- and the visit leads to his use of hypnosis to disclose her apparent manifestation of a second personality, a German woman from the 1800s, also a lover to the Bavarian crown prince Rupert.

Amid many dull talking-heads scenes, the two of them fall in love, but Hamilton doesn't want a "second wife" in the bargain. While Hamilton seeks to solve Summers' dilemma, he also happens to be called in to consult on the psychological state of Morley the murderer. (Morley later proves crucial to Hamilton being able to solve his reincarnation problem). The psychiatrist eventually determines that there are no spirits involved, and that Summers has simply created a fantasy-construct-- which, significantly, is what modern authorities tend to believe about the actual "Bridey Murphy" controversy.

But although there's nothing supernatural about Summers, Hamilton's use of hypnosis carries an uncanny vibe. Though he's supposed to be no more than a skilled professional, he works a sort of "mental magic" when he uses Morley's presence to "exorcise" Summers' false construct. The title SPELL OF THE HYPNOTIST is also appropriate because the main character-arc is all about Hamilton overcoming the obstacle to his future marriage. (It helps that Fleming is the best actor in the ensemble, though good acting isn't the determining factor in determining a story's main character.) Ann Summers in both of her personalities is more of an object to attain than a character, and so SPELL is structurally the opposite of the slightly later TERROR IN THE HAUNTED HOUSE, where the haunted female is the star of the narrative.

SPELL is certainly mediocre as plain entertainment. But it still has a couple of reasonably involving scenes, which certainly puts it way ahead of THE SNOW CREATURE.

Posted by Gene Phillips at 2:23 PM
Email ThisBlogThis!Share to TwitterShare to FacebookShare to Pinterest
Labels: enthralling hypnotism and illusionism (u), the uncanny