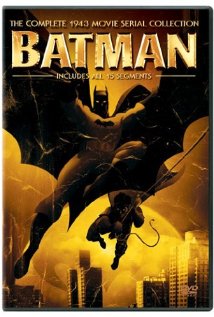 For the last forty years the 1943 Batman serial has been subjected to massive derision, largely because of its cheapjack sets and costumes and its World War II jingoism.  However, the serial is considerably more accurate to the Golden Age comic-- only about four years old by that time-- than many similar adaptations of comic books or strips into the serial format.

Director Lambert Hillyer, who launched his career with William S. Hart silents, directed almost nothing but westerns during the sound era. Yet in the 1930s he proved that he could work with more extravagant subject matter in his two 1936 horror films, THE INVISIBLE RAY and DRACULA'S DAUGHTER.  The BATMAN serial was the last of his delvings into the world of marvelous cinema, but as in the horror flicks, Hillyer was more than able to create the atmosphere necessary to adapt the early, Expressionism-influenced Batman comic. The Japanese villain Doctor Daka makes an eminently hissable mad-scientist villain, particularly for his ability to turn healthy men into subservient zombies (an apt metaphor for the fate of democracy at the hands of the Axis "New Order," whether by accident or design).  The battles of the Dynamic Duo against Daka's various thugs aren't rendered with the amazing precision seen in the Republic serials, but Columbia's fights look more like real, rough-and-tumble brawls.

Douglas Croft (about 17 at the time) is an undistinguished Robin, though he could have been much worse.But given a decent costume, Lewis Wilson might've made an excellent Batman, since he had a good enough build (which he kept up in the 1950s cultfilm WILD WOMEN).  His scenes as Bruce Wayne, shifting between affable playboy and determined crusader, are a welcome change from the one-dimensional granite-jawed do-gooder. As Daka, J. Carroll Naish is the only other actor who really makes a strong impression, although William Austin puts over a strong comedy relief presence as cinema's first Alfred.

Like most serials, BATMAN starts off strong, as the opening chapters establish some "mcguffin" that both heroes and villains must pursue-- in this case, radium needed to power Daka's disintegrator ray-- and then it sags in the middle from repeating the setups.  But at least BATMAN delivers a good pulp-style conclusion, though it's also the section heaviest with racial slurs on American's Nipponese opponents. I can imagine an argument in favor of war propaganda as a necessary evil.  But I must admit that BATMAN does indulge in anti-Japanese rhetoric a little too heavily for modern sensibilities..

Posted by Gene Phillips at 9:43 AM
Email ThisBlogThis!Share to TwitterShare to FacebookShare to Pinterest
Labels: combative adventures, the marvelous