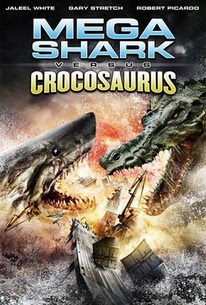 MEGASHARK VS. CROCOSAURUS picks up where the previous MEGASHARK VS. GIANT OCTOPUS left off, but leaves behind the eight-armed monster and substitutes a big croc. None of the characters from the first film show up, but this is no loss, since the first ones were forgettable. In contrast, the script for CROCOSAURUS comes up with three viewpoint characters-- a Navy scientist, a U.S. government agent, and an English hunter of rare animals-- who play off one another a little better than the human characters found in most big-beast flicks.

Although Megashark is the focus of this four-flick series, if only in line with the scores of killer-shark films out there, both the Giant Octopus and the Crocosaurus are more visually interesting, and I consider both of them co-stars alongside the big megalodon. The script works in a relatively well-thought-out conflict for the shark and the croc, before the interfering humans manage to wipe them out. 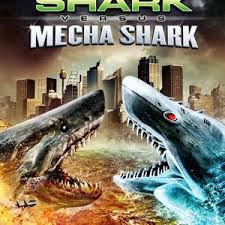 Though there's not much to say about CROCOSAURUS, it's an improvement over the second sequel, MEGASHARK VS. MECHA SHARK is a dull slog indeed. I'm not sure why the honchos at the Asylum didn't just keep churning big prehistoric survivals, unless they had some delusion of being able to come up with a robot as appealing as Toho's Mechagodzilla. The "Mecha Shark" of the title is a shark-shaped submarine invented by a boring lady scientist, and although she wants to use her invention against a new Megashark (the first one have been finished off in the first sequel), the Mecha Shark has a tendency to go berserk at times, as if it was a real sea-beast.

MECHA SHARK's only accomplishment is to make the third sequel, MEGASHARK VS. KOLOSSUS, look at least adequate by comparison. However, I don't think either Mecha Shark or Kolossus have enough personality to share the spotlight with the monster shark, since they're just tools of those pesky humans.

Posted by Gene Phillips at 1:12 PM
Email ThisBlogThis!Share to TwitterShare to FacebookShare to Pinterest
Labels: combative dramas, the marvelous