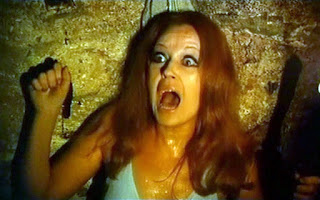 SPOILERS immediately: MURDER MANSION is a supernatural hoax flick, putting it firmly in the domain of the phantasmal figuration. To my knowledge the film is only readily available in a dubbed English version, so it’s hard to judge whether or not that release left out any material that would have made the original Spanish-Italian narrative seem less derivative and haphazard. I tend to doubt it, though.

The two most oft-used tropes of the “old dark house” template are either that (1) a bunch of people come to stay at a mansion for some common purpose, such as the reading of a will, or that (2) a group of people, either close associates or strangers with unrelated backgrounds, end up taking shelter in said mansion to escape bad weather or similar problems. In this case, MANSION hews to the latter model. Because the titular dwelling-place seems perpetually enshrouded by heavy fog (the Spanish title was “the Mansion in the Fog”), several people, one individual and three separate couples, end up taking refuge in the mansion of a vaguely aristocratic couple, the Clintons. Martha Clinton (played by top-billed “Evelyn Stewart”) goes out of her way to tell all of the travelers the spooky story of her aunt, who was rumored to be some sort of vampiric witch before she and her chauffeur died in a car-crash. Then, for the rest of the travelers’ stay at the mansion, they’re besieged by the spectral figures of aunt and chauffeur. There are some decent minor scares before it’s revealed that the Clintons are pulling off the ghostly imposture, hired to do so by one of the husbands, who’s apparently trying to drive his rich wife crazy.

Generally, this sort of Gothic spook-show only sounds workable when there’s an isolated target to gaslight, one person who will sound daffy when he or she rants about vampires and ghosts. Such a plot doesn’t seem at all tenable when a bunch of people are seeing specters in one place, even if most of these witnesses are supposed to get killed. In essence, the writer wanted to merge a gaslight-plot with giallo-style incidents in which a bunch of people get knocked off in succession. (To be sure, though European cuts are often spicier than their English dubs, I don’t see a lot of room for any artiful Argento-style executions.) With one exception, all the putative victims aren’t any more engaging than stick-figures, though the cast-list includes a number of familiar faces of Euro-genre films. When this is the case, I tend to view the person or persons perpetuating the hoax to be the real stars of the show—unless the hoaxers actually create a fantasy-persona that’s more resonant than they are, as I’ve seen in such films as MARK OF THE VAMPIRE and APRIL FOOL’S DAY, to say nothing of the Washington Irving classic “The Legend of Sleepy Hollow.”

Of the ensemble of targeted victims, only one character stands out, and with a different approach it wouldn’t have been hard for the film to make her the star. Elsa (Anelia Gade) is the rich wife, married to a wastrel named Ernest, the fellow who hired the Clintons to do his dirty work. But Elsa’s real problem with Ernest—and the thing that keeps him out of her bed—is that her real name ought to be Electra. In a fevered flashback scene, Elsa is seen as a teenager at a party, scolding her old man—whose good looks she remarks upon—for dating a “child.” In truth, the so-called “child” is one of Elsa’s own classmates, and thus a young woman her own age. It’s clear that Elsa wanted more from her father than paternal attention, and that she married Ernest in part because her father didn’t like him—though her act of keeping Ernest at a distance revealed Elsa’s true sentiments. But teen-Elsa’s father dies of a heart attack while getting it on with the classmate—the film’s one good psychological fantasy, merging sex and death. Thus, modern-day Elsa remains terminally messed up—so much so that by making her crazier, Ernest unleashes a demon on himself. At the climax, when Ernest thinks he’s going to get away with everything, Elsa shoots him to death. She doesn’t see her actual husband, but rather the image of her dead father, whom she’s executing for having had sex with someone who wasn’t her. This hyper-Freudian fantasia is the only element that lifts MURDER MANSION out of the level of the routine scary movie it was designed to be.

Posted by Gene Phillips at 2:27 PM
Email ThisBlogThis!Share to TwitterShare to FacebookShare to Pinterest
Labels: perilous psychos (u), phantasmal figurations (u), the uncanny