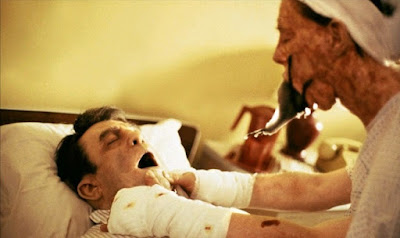 THE HIDDEN neither loses nor gains from the standpoint of expired years. An efficient thriller with lots of gunplay and car-chases, its main innovation is that the featured team of buddy-cops are a human (Thomas Beck, played by Michael Nouri) and an alien masquerading as an FBI agent (Gallagher, played by Kyle MacLachlan).

Alien Gallagher has taken over the body of a dead agent in order to seek a body-hopping E.T. of another species who has to come to Earth to usurp citizens and take them on criminal joy-rides. Naturally, for some time Beck has no way of realizing that the various breakout of random criminal acts stem from one source. But the longer he spends in the company of the quixotic Gallagher, the more he sees that "the truth is in there"-- that is, a gross ALIEN-imitator who slurches his way into the gullets of human beings prior to making them his pawns. Gallagher can destroy the creature, but only in a crucial period when the unnamed malefactor is outside a human body.

Because in his  own world Gallagher is a policeman who lost his partner, he has a rough bonding-experience with Beck. There's no great depth to their exchange, though, even on the level of DIRTY HARRY. The most interesting symbolic motif in the film is that while the evil alien is all gooey putrescence, the good alien, when he shows off his own ability to body-switch, manifests as an angelic ray of light.

Posted by Gene Phillips at 3:28 PM
Email ThisBlogThis!Share to TwitterShare to FacebookShare to Pinterest
Labels: combative adventures, the marvelous