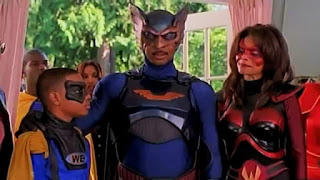 This Disney Channel telefilm appeared in the same year as the first live-action X-Men movie, but the concept of UP UP AND AWAY could have appeared as easily in the 1960s. If one can imagine some producers attempting to do THE MUNSTERS as a family comedy about superheroes instead of using movie-monsters, you would get something very like this movie, with lots of slapstick jokes counterpointed by lackluster homilies about the relationship of parents and kids. In this case, the homily would probably read something like, “Parents have to learn not to project unrealistic expectations on their kids.”

The Marshalls make up a family of superheroes in a world where, like THE INCREDIBLES, a lot of superheroes are seen bouncing around though no supervillains seem to be extant. They are also an all-black family of do-gooders, though the script thankfully downplays any sociopolitical content beyond giving the superhero father (Robert Townsend) the name “Bronze Eagle.” The Eagle is married to heroine Warrior Woman (Alex Datcher), who somehow maintains the look of a smoking-hot model while fixing breakfasts for her three children: oldest child Adam, youngest child Molly, and middle child Scott. Adam and Molly have both manifested super-powers that in no way resemble those of their parents But Scott, about to turn 14, has not yet gained any special abilities. One of the basic rules of the universe is that if one’s powers don’t show up by age 14, they never will, and so Scott has deep fears of being the odd man out. (Even his grandparents have super-abilities, with Scott’s grandfather—a horribly miscast Sherman Helmsley—representing the old guard of superheroes.) Scott decides to fake his ascension to superhero status, but this merely results in his exposure as a “power-less wonder” earlier than intended.

The best thing about this bland concoction (aside from how good Ms. Datcher looks in a skintight superhero outfit) is that Scott doesn’t obtain any eleventh-hour abilities, so that he and his family must cope with this admittedly mild conflict. But, in order to underscore the idea that mere mortals can also make a difference, a poor excuse for a supervillain at last shows up, and Scott manages to foil the mastermind and free his family from the villain’s machinations. However, the climactic scenes are extremely low-energy and desultory, and Scott doesn’t even get into a basic hand-to-hand fight during his triumph. (Didn’t his heroic daddy train his middle son to fight with his fists, even if he did get super-powers?) This lack of a climactic fight-scene gives UP UP AND AWAY its only distinction. Since I deem all of Scott’s heroic relations to be no more than support-characters—AWAY is Scott’s story, not theirs—this is a superhero film that doesn’t feature even an ordinary human with combative skills, making the movie even less relevant to the superhero idiom than HBO’s THE BOYS.

Posted by Gene Phillips at 2:19 PM
Email ThisBlogThis!Share to TwitterShare to FacebookShare to Pinterest
Labels: the marvelous