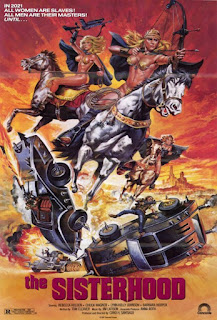 Just as one man’s trash may be another man’s treasure, not all makers of trash-films can find treasures in their own junky entertainments.

Filipino writer-director Cirio H. Santiago, for example, gained a measure of fame with action-film addicts throughout the seventies and eighties, in that he could turn out a film full of blood, breasts and bullets with the best of them. It’s also of passing interest that Santiago put out a fair number of “femme formidable” flicks, in which sexy women demonstrated a separate but equal ability to kick ass. He not only directed the kung-fu tournament film TNT JACKSON, but also both of its remakes, 1981’s FIRECRACKER (the best of the three IMO) and1993’s ANGELFIST.

So one might have thought he might do well directing a cheaply-made film about Amazons in a post-apocalyptic world. Unfortunately, Santiago just didn’t have the right mojo for even this simple form of science-fantasy, and what one gets is even less interesting than his other films in the genre, such as EQUALIZER 2000 and FUTURE HUNTERS.

SISTERHOOD starts out with a little promise. Following the usual barely described apocalypse, viewers are told that most of the surviving human tribes have regressed to a barbaric patriarchy, in which women are kept in bondage by the stronger males. However, there’s one rebellious all-female tribe, the Sisterhood, which lives apart from the other tribes. The male tribal leaders fear these women warriors because some if not all of them manifest mutant abilities, even though they tend to be very minor in nature (and thus not requiring much expense in the FX department). The viewer first encounters two of the sisters: Alee, who can do a little telekinesis, and Vera, who can heal others’ wounds instantly. The duo then encounters Marya, a young woman from another tribe, exiled for her witchy ability to commune with a pet hawk. When a gang of hostile raiders attack the threesome and abduct Vera, Marya joins Alee in the attempt to rescue Vera.

I didn’t expect any deep disquisitions on gender inequity from THE SISTERHOOD, just some basic entertainment in which women got to kick a little butt. But though actresses Rebecca Holden and Barbara Hooper go through the motions of fighting with swords, they’re never convincing as warrior-women. Lynn-Holly Johnson projects more personality in the character of Marya, but despite her real-world skill at gymnastics she doesn’t fare much better in the fight-scenes. Further, Santiago opts for an easy victory by having Alee and Marya uncover a cache of 20th-century weapons, enabling them to take down a whole tribe of male malcontents with barely a mussed hair. So SISTERHOOD lines up with Santiago’s other science-fantasy flops, not lively enough to be kinetically involving and not goofy enough to engage the irony response.

Posted by Gene Phillips at 2:13 PM
Email ThisBlogThis!Share to TwitterShare to FacebookShare to Pinterest
Labels: combative adventures, the marvelous