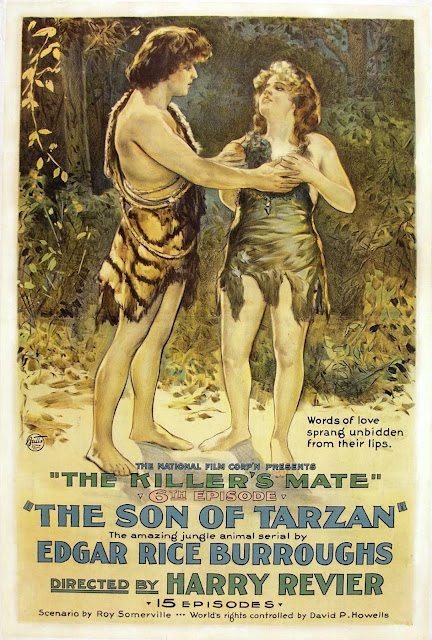 Serials in the sound era weren’t known for fidelity to their sources, but a few silent chapterplays hit closer to the mark. SON OF TARZAN may have been following the lead of the 1918 TARZAN OF THE APES, a feature-length film which faithfully adapts the first half of the first Tarzan novel. Further, whenever SON departs from the 1915 Burroughs novel, it’s generally an improvement.

I wrote that the novel that gave us “Korak Son of Tarzan” didn’t manage to create a hero equal to his famed sire, and the serial is also little more than a variation on the jungle-man theme. But though some silent serials ate just assemblages of perilous situations, sometimes lacking the celebrated “cliffhangers,” the various vicissitudes of SON OF TARZAN are more artfully crafted. Like the perils of the novel, all the conflicts serve to give hero Korak and heroine Meriem their “baptism of fire” until the happy ending.

One huge improvement on the novel is the serial’s main villain. In the book Paulvitch, the fiend who is indirectly responsible for sending the son of Tarzan and Jane to the jungle, isn’t killed right away, but survives his first encounter with the young hero and pursues the youth to Africa as a means of seeking vengeance on Tarzan. Since the novel’s villains are weak and narrowly conceived, Paulvitch, played by Eugene Burr, provides a more obsessed and hiss-worthy enemy.

As in the book, Korak and Meriem starts as children, mature during their very chaste time together in the jungle, and then are played by different actors in their teen years. Rather surprisingly, the serial even preserves the novel’s idea that Meriem initially thinks of Korak only as a “big brother,” but slowly gains an awareness than she doesn’t want a brother’s affection from him. As a displacement for those burgeoning sexual feelings, the serial adds a detail absent in the novel: a scene in which Meriem goes bathing in a river and has to be rescued from a beast by Korak. Whether or not the makers of the 1932 TARZAN THE APE MAN were aware of this earlier adventure in jungle-nudity is anyone’s guess.

As in the novel, Tarzan and Jane play supporting roles, kept in the background as they tirelessly search for their lost offspring. However, someone in production must have decided that the audience wanted some real ape-man action, for the serial introduces a subplot in which thugs attack Tarzan and get their asses handed to them by jungle savagery.

Posted by Gene Phillips at 1:18 PM
Email ThisBlogThis!Share to TwitterShare to FacebookShare to Pinterest
Labels: astounding animals (u), combative adventures, exotic lands and customs (u), outre outfits (u), superlative skills (u)