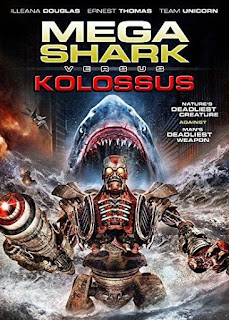 In one of my reviews of a Syfy Channel flick, I observed that the channel’s spate of giant-monster films suggested that the film-writers were sick of being told that everything in the ecosystem was deeply precious and vital to human existence. These “creature on the loose” films usually culminate in some heroic individual managing to stick it to some colossal representative of the natural world.

However, since the Asylum’s “Mega Shark” franchise necessitates finding a way to bring back its jawful antagonist again and again, at some point the writers began drawing on abstruse ecological theories, not unlike the Gaea hypothesis, to explain the big beastie’s resuscitation. In the original film, MEGA SHARK VS. GIANT OCTOPUS, a prehistoric megalodon got flash-frozen into an iceberg, as did the other creature of the title. The big shark dies in the first sequel, but a second Mega Shark emerges from another iceberg in the second sequel. In the third and thus far last sequel, humans have very sensibly gone hunting down all the frozen megalodons and destroying them. Yet one Doctor Kelly advances the theory that the ecosystem keeps finding ways to generate new Mega Sharks every time human beings kill one. The one that perished in Part Three, therefore, gave parthenogenetic birth to a new spawn, which shows up in Part Four to contend with the spawn of human ingenuity, Kolossus.

The script is too jejune and erratic to play up the idea of Mega Shark as an avatar of the ecosystem, but it’s probably no coincidence that his opponent is spawned by a human seeking not to balance the natural world but to end it. Kolossus is a colossal robot, loosely compared to the giant bronze warrior Talos from JASON AND THE ARGONAUTS, and he’s also a doomsday weapon, designed to annihilate sinning humanity. Somehow the human protagonists—the aforementioned doctor, another scientist, and a tough lady operative-- must find a way to eradicate both a menace arising from the natural order and a peril spawned by the hubris of homo sapiens. Just to keep the pot boiling, there’s also an ecology-oriented supervillain who attempts to control both the big shark and the robot to his own dastardly ends.

Even for this subgenre, KOLOSSUS is badly padded with lots of scenes of Navy ships doing uninteresting things. Worse, when the film finally gets around to a match between the two colossi, it’s less like “When Titans Clash” and more like “When Titans Splash.” It's also possibly the least bloody of all giant shark films, so despite the coda’s promise of another Mega Shark flick, it might be time to let this franchise die a natural death.

Posted by Gene Phillips at 1:58 PM
Email ThisBlogThis!Share to TwitterShare to FacebookShare to Pinterest
Labels: combative dramas, the marvelous