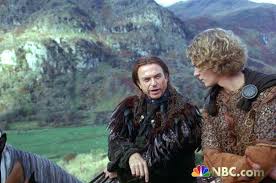 Most works that have appeared under the imprimatur of Hallmark Entertainment have struck me as thoroughly mediocre. However, the 1998 two-part telefilm MERLIN proves a decent addition to the annals of modern-day Arthuriana.

Any creators working with Arthurian story materials is inevitably faced with something in the nature of an all-you-can-eat buffet table. Creators have a huge selection of stories, some of which contradict one another, in order to produce a new work for modern audiences. MERLIN therefore can’t be faulted for lack of fidelity to a prescribed model, since nearly every creator picks and chooses from the buffet of both archaic tales and modern variations.

One prominent variation is the idea of medieval witches and warlocks fighting a “rear guard” action for paganism against encroaching Christianity in Great Britain. Mab, Queen of the Faeries (Miranda Richardson), sees the “Old Ways” dying, so she gets the idea to bring forth a great mortal magician to aid her in her quest to reverse the tide. Merlin, instead of being fathered on a mortal woman by a demon as in some old tales, is brought into being with no father at all, on top of which his mortal mother dies in childbirth. A former pagan woman, Ambrosia, becomes the child Merlin’s surrogate parent, since Mab, arguably his “bad mother,” doesn’t want to mess with child-raising. Merlin speedily grows to manhood, at which point he’s played from then on by Sam Neill, and he shows a talent for magical manipulation even before Mab takes him under her wing. However, Merlin is less interested in defending paganism than in building a normal life for himself, and after he meets a comely young noblewoman named Nimue (Isabella Rosselini), he attempts to avoid magical in general and the schemes of Mab specifically.

Though there are no Christian supernatural entities in MERLIN, Mab becomes something very like Satan, constantly tempting and manipulating others, particularly her disobedient “son.” Once Merlin inevitably returns to the practice of magic, he foresees the necessity of bringing forth a great king named Arthur, even if this means allowing his father to spawn him on the body of a woman married to another lord. Arthur’s teen years are speedily bypassed, and his drawing of Excalibur and ascension to the throne are given adequate but somewhat rushed treatment. Then Mab comes up with her coup de grace, suborning the ambitious mortal girl Morgan LeFay (Helena Bonham Carter), leading to her unholy union with her half-brother Arthur and thus the birth of Modred, whose iniquity will doom Camelot.

There are a number of good psychological touches in MERLIN. Though Richardson’s Mab becomes somewhat trying (she always speaks in an intense stage-whisper), her disinterest in human love alters late in the game, when she forms a maternal bond with Modred, even though he’s less her true son than is Merlin. Neill, who was in his early fifties at the time of filming, was probably not anyone’s ideal Merlin, whether as a young or old character, but he treats the role with respect and handles all the thaumaturgic pronouncements handily, particularly in his climactic magical duel with Mab. Arthur is played by a lanky actor who never seems very kinglike, though it’s a good touch that he at least resembles the actor playing Modred. There are some good tragic moments with the misguided sorceress Morgan, and on the whole the film probably equals THE MISTS OF AVALON in terms of providing plum roles for female characters, but without falling into AVALON’s soap-opera bathos.

At the same time, though the script does work in a lot of the metaphysical and sociological myths attendant on the founding of Camelot, the story never quite manages to bring all of the separate tropes together into an impressive whole. The Grail myth is touched on so briefly that the writers probably ought to have left it out, which might have given them more space to build up the Arthur-Guinevere-Lancelot relationship. On the whole, it’s a respectable Arthurian tale, focused less on the king than on the kingmaker. But its apparent main theme—Merlin’s mother issues—is never rendered well enough to bring forth any narrative “magic.”

Posted by Gene Phillips at 1:45 PM
Email ThisBlogThis!Share to TwitterShare to FacebookShare to Pinterest
Labels: combative dramas, the marvelous