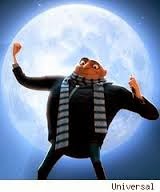 
My second viewing of DESPICABLE ME was much like the first.  It's a film with some good bits of business, layered into a pleasantly predictabe storyline.  Hollywood has produced any number of similar films in which a rogue does something beneficent with a selfish end in mind, and ends up being converted to good by the simple act of being forced to act good.

DESPICABLE's main interest is that it presents an alternate world derived from the superhero idiom: one in which there exist some unspecified number of super-villains, but no superheroes.  Following the opening stunt-- in which the world is horrified to learn that the Great Pyramid of Giza has been stolen-- a newsman wonders "which of the world's villains" is responsible.  We only see two, however: Felonious Gru, the needle-nosed, stocky-shaped "me" of the title, and his enemy, the young whippersnapper Vector.  Both establish that this is a world of purely comic villainy: one where villains exist in a state of what Veblen called "conspicuous consumption." After it's revealed that Vector is responsible for stealing the Pyramid, Gru determines that he wants to top his rival by shrinking and stealing the Moon itself.  It's never clear about how either supercrook could profit from these bizarre deeds, but their actions are very much in keeping with the attitudes of certain comic-book villains-- the Joker in particular-- who often indulge in stealing absurd objects less for profit than for the sheer thrill of defying the law.  Here the forces of law and order are barely even seen; DESPICABLE's world is an arena in which two ludicrous lawbreakers cross swords-- or ray-guns, as the case may be.

In order to recover a vital weapon from Vector-- one that Vector heisted during Gru's original heist of the object-- Gru adopts three adorable little girls.  He uses the girls as catspaws to infiltrate Vector's sanctum, accomplishes his mission, and then-- can't seem to figure out how to get rid of the rambunctious trio.  Refreshingly, the three girls are reasonably well characterized so as to keep them from being overly sentimental in their growing attachment to their new "daddy," whom they're not initially too crazy about either.  But the expected filial bond takes place nonetheless, not least because Gru nurses some frustrated familial feelings as a result of an indifferent-- but still comedic-- mother-from-hell.

There's never a direct combat between Gru and Vector, for throughout the flick they fight one another largely through the use of super-weapons-- though Gru has a nice moment toward the end, personally invading Vector's fortress single-handed and quashing its many threats.  His motive by that time is no longer the satisfaction of his ego but his concern for the safety of the girls, whom Vector has kidnapped.  This in turn leads to a Big Climax in which Gru rescues his adoptive daughters from Vector's ship, all while Vector has lost control of the situation because the shrunken Moon has begun to assume its former size.  Still, I regard this as a "combative comedy" because the outcome-- in which Gru re-acquires his daughters and puts the moon back into place-- takes place because of his decisive actions in pursuing Vector's ship.  Still, Gru's success and Vector's humiliation take place because of their ongoing opposition, so it's the outcome is the result of that combative stance.  In this DESPICABLE resembles a number of other combative comedies I've reviewed here, such as
1991's HOOK and 2012's DARK SHADOWS, where fate more than the central hero strikes the final humiliating blow against the antagonist.


Posted by Gene Phillips at 12:49 PM
Email ThisBlogThis!Share to TwitterShare to FacebookShare to Pinterest
Labels: combative comedies, the marvelous