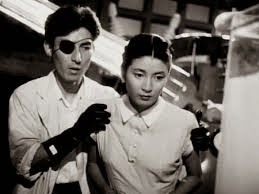 
The two-disc Criterion collection of both the original GOJIRA and the English-language remake gave me my first opportunity to screen the Japanese original and to compare it to the more familiar version, the version that was largely the one translated and distributed to other countries.  In addition, both discs contain cultural commentary from noted "Godzilla scholar" David Kalat, providing perspective on the virtues of both movies.

Of the two, the 1954 film is superior in terms of dramatic power, though the drama may not be fully evident without a grounding in the fundamentals of Japanese culture. GOJIRA begins with the covert romance between leading-man Ogata (a salvage-expert in this film, promoted to "marine officer" in GODZILLA) and leading-lady Emiko, daughter of a paleontologist, Dr. Yamane, who's been called upon to investigate the mysteries of Godzilla's nature. Yamane, though a vanguard of modern scientific thinking, has helped arrange a marriage between Emiko and Yamane's colleague, the saturnine Doctor Serizawa.  Unfortunately, Emiko regards Serizawa as little more than a respected brother.  The American version cuts some of the material that establishes that Serizawa definitely does not think of Emiko as a sibling-- for instance, Serizawa's appearance at dockside when Yamane and the two lovers are about to depart Japan for Odo Island.  The American version also loses much of the intense torment of Emiko's character, particularly evident in the scenes where she breaks her promise to Serizawa, her intended husband, in order to tell her lover about the fateful Oxygen Destroyer.

However, if GODZILLA lacks the intense dramatic values of GOJIRA, it does gain a different narrative power from the unifying presence of Raymond Burr's reporter Martin.  Because he is the primary viewpoint character from the beginning to the end of GODZILLA, Martin is the reason the Japanese drama becomes more accessible to non-Japanese viewers.  Martin begins the film as a blithe, easygoing fellow, clearly at home with traveling in many lands, and by the conclusion of the film's extended flashback he's a man who's looked upon the Apocalypse.  Burr's horror-stricken Martin is a perfect stand-in for all those watching the film from a non-Japanese perspective. The Godzilla-spawned horrors of Japan-- clearly analogous to the real-life nuclear devastation of Hiroshima and Nagasaki-- thus become horrors that are accessible to all viewers.

Though it's routine to see Godzilla as a symbol of nuclear power gone awry, it struck me that Japanese culture might have spawned something like Godzilla had the Manhattan Project failed to produce its deadly fruit.  At the conclusion of Godzilla's final and most devastating assault on Tokyo, he's finally driven away by fighter-jets-- in my opinion, not because their strafing-fire hurts him any more than the electricity and tank-shells he's shrugged off, but because the aerial bombardment confuses him, causing him to seek cover in the ocean.  At this point, some of the survivors ashore cheer at the temporary victory of "their boys," and as I watched that scene it struck me that Godzilla is also the demon of the Japanese defeat, incarnate in the form of an ancestral dragon/dinosaur.

Many before me have proposed this alternate WWII-scenario: had the U.S. not developed workable atomic bombs, and had Japan continued to refuse to surrender, the U.S. and their allies would have invaded with aerial and naval forces, perhaps wreaking on Japan a more general devastation than the targeted destruction of two Japanese cities.  I don't repeat this scenario with an eye to making any apologia for the Nuclear Age.  But as I watched Godzilla being driven away by the jets, I thought, "In a realistic war-film, that might have been jets driving away an attacking destroyer or the like."  And of course, in this alternate-world scenario, that victory would have been equally temporary; Japan would eventually have been forced to surrender, but only after incalculable carnage, albeit carnage brought about through more conventional military means.

In the real world, Hiroshima and Nagasaki were unwilling scapegoats for the rest of Japan; those two cities suffered the worst destruction modern science could concoct.  The rest of Japan was largely spared that particular consequence of war.  Despite post-war censorship in Japan about the consequences of the bombings, did any Japanese experience a sense of "survivors' guilt?"  The sense that some of their countrymen had hideously perished, so that others could enjoy a return to prosperity and plenty?  If so, the appearance of Godzilla might have carried the resonance of a doom that had merely been deferred for a while, a doom that was now catching up with them.  The GODZILLA film in particular is explicit about warning that Godzilla will not stop with Tokyo, that all of Japan will soon be the victim of the great beast.

Of course, in the world with the Bomb, the Japanese did still have the threat of the Bomb hanging over them, thanks to the continuing arms race between the U.S. and Russia. But the metaphor of Godzilla exceeds the limits of atomic fear, and extends to the many anxieties about modernity.  Ishiro Honda's original film is far more explicit about the tensions between Japanese tradition and all the aspects of modernity, from Japan's early 20th-century modernization-- which played a key role in the nation's military ambitions-- to the new wave of postwar modernization under the occupation.  When GODZILLA tosses out the notion that the natives of Odo Island speak of a monster called Godzilla, the assertion carries no depth: it's like a pithy quote from National Geographic.  In Honda's film, one of the village elders explicitly aligns the apocalyptic beast with the traditions of the past, and tells a lippy woman that he'll summon up Godzilla to eat up such "cows."  In a scene following the monster's revelatory appearance, a government official counseling discretion is shouted down by yet another mouthy female.  Emiko is in some ways very traditional-- when her father enters his house she respectfully bows before him and removes his jacket for him.  But the crux of the drama revolves around her decision to reveal Serizawa's secret.  Without her, Serizawa might have remained paralyzed by guilt-ridden indecision.  Certainly Ogata lacks the moxie to make a difference, either: in his only attempt to declare his intentions to Emiko's father, he bollixes up the attempt by getting on the old man's bad side.  Without Emiko's quiet heroism, perhaps this Godzilla would have run rampant over all of Japan before moving on to new prey.

Though the American versions sports some very good lines invoking the mystery of Godzilla-- I particularly like Martin calling destroyed Tokyo "a smoldering memorial to the unknown"-- GOJIRA invokes the unknown much better, particularly in positing Godzilla as a liminal creature, one evolved midway between the dinosaurs of the sea and the dinos of the land.  I particularly like Yamane's mid-film allusion to other "caves" where more beasts like Godzilla may lurk, thus setting up the film's final line:

"But if we continue conducting nuclear tests... it's possible that another Godzilla might appear somewhere in the world again."

Though other Godzillas did come to life and continue to rampage, none of them did so with the transcendent power of this one.  There are flaws-- particularly the inadequacy of the aerosol spray initially used for the Big G's atomic breath. But both the original and the Americanized version deserve credit for spawning one of the few serial myths originated purely by the cinema.


Posted by Gene Phillips at 1:26 PM
Email ThisBlogThis!Share to TwitterShare to FacebookShare to Pinterest
Labels: combative dramas, the marvelous