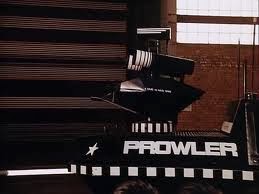 
Memory's a strange thing.  I hadn't watched this routine Chuck Norris vehicle in thirty years, but had a dim memory that it was an adequate action-opus, with the odd touch that at one point Norris' city-cop hero makes use of an automated crook-catching vehicle to help him take down some gangsters.  When I rewatched it, I found it a complete waste of time, even though the director Andrew Davis went on to do high-powered adventure-flicks like 1993's THE FUGITIVE.

Norris, playing a routine maverick-cop named Cusack, attempts to save an innocent young woman, daughter of a known mobster, from being killed in a gang war.  The gangsters' motivations are singularly opaque, and one can only figure out that Henry Silva's character is the main villain because he stands around gloating over the latest rub-outs.  I don't expect a lot of motivation from the hero of a Chuck Norris vehicle, but the karate-expert gives one of his worst performances here, apparently trying to put across Clint Eastwood's signature affectless attitude.  When Norris shoots for this attitude, the actor merely looks dispeptic.  Norris' performance in SILENT RAGE is no classic either, but at least it doesn't seem to be a rank imitation of someone else.

It's extremely unlikely that any modern city would be foolish enough to turn law enforcement over to a robotic vehicle-- one equipped with machine guns, no less. Probability aside, I had to decide whether this particular manifestation of a robot could be considered "marvelous" in any way.  It's instructive, though, that Cusack isn't able to use the robot for very long: it assaults a bunch of thugs with its machine guns for a few minutes, and then shuts off, having completed its demonstration cycle.  Because of this, I decided that at best this film's robot has been portrayed as being within the sphere of modern, non-marvelous technology, such as I described in one of my ARCHIVE essays:

Only one type of robot might be acceptable to this [naturalistic] standard: one that has already been constructed for use in current scientific laboratories, like the ones seen in the essay FIVE REAL ROBOTS THAT OUTPERFORM HUMANITY.