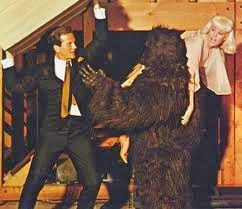 
This will not be a full-fledged review, but simply a few notes on one of the sixties' more notorious bombs.  This 1967 flick, allegedly intended to be a television-film but released to theaters as well, is listed as having some SF-elements, such as "suspended animation," in John Stanley's CREATURE FEATURES guide.  I happened to discover that roughly eight-tenths of the film had been downloaded onto YouTube.  So even though a full review isn't possible, I think I got the gist of what this peculiar recasting of the classic silent serial had to offer in terms of metaphenomena, to wit:

(1) Pauline's beau George gets frozen in a block of ice and is defrosted with no ill effects.  This is probably the "suspended animation" of which Stanley speaks.  I file this one under "freakish flesh," since George's survival seems to be merely a lucky fluke brought about by his own physical nature.

(2) As the photo above should suggest, virginal Pauline is menaced by many illegitimate suitors throughout the film.  The ape in the photo is only the second such anthropoid to have Kong-like desires on the maiden; she also encounters one in the jungle.  There's nothing particularly uncanny about either beast.  However, Pauline does also encounter a tribe of "white pygmies" (one of whom is played by Billy Barty).  This by itself qualifies PAULINE for my "exotic lands and customs" trope.  In addition, the pygmies tell the beleaguered heroine that they have a potion that can shrink not just her head, but her whole body down to their size.  Presumably the intent is to make it possible for her to marry one (or all?) of them.  But the film never actually shows anyone being shrunk, so I file it under the trope of "illusionism."

This film, credited to one writer (supposedly basing his script on the original serial) and two directors, may be the most slapdash 1960s flick that boasted a repertoire of familiar Hollywood faces-- Pat Boone, Terry-Thomas, Kurt Kaznar, Edward Everett Horton, and Vito Scotti.  It's certainly a fine contender for "worst film of the decade," in part because the records of some-- though not all-- of the filmmakers show them to have been reasonably competent journeymen.  Though co-director Joshua Shelley had little to show on his resume in 1967, Herbert B. Leonard at least had a solid career. He served as production manager on some of the last serials-- including the last-released serial of the 1950s, BLAZING THE OVERLAND TRAIL-- and later produced somewhat tonier adult entertainments like ROUTE 66 and THE NAKED CITY.  One might incline to cite the Peter Principle to explain why PAULINE went so wrong.  Yet four years later, Leonard's final directorial credit appeared on the Robert Mitchum drama GOING HOME-- a film which had flaws but did not show a total lack of directing ability.

So the guilty "Peter" here may be some executive who decided to propel minor actress Pam Austin-- then mostly known for a series of car commercials-- into a starring role.  One wonders if an actress with a proven talent for playing wide-eyed innocents-- say, Barbara Eden-- might have salvaged something from the terminally dopey role of Pauline.  But neither Eden nor anyone else could have saved the film.  From the opening it's clear that the filmmakers' only strategy is to dish out a lot of slapstick routines, but without showing an iota of good timing or inventiveness.  Pat Boone's a little more in touch than Austin with the task of playing a clueless innocent, though, and the film's only good-- if bizarre-- line takes place when a doctor warns Pauline not to go near George:

It would be interesting to do a general analysis of the peculiar nostalgia that cropped up in the 1960s for the silent era, and for the serials spawned in that period, even though serials themselves had lasted  throughout the sound era, ending in the mid-1950s due to the competition of television. Inevitably one thinks first of the revival of the character of the Batman, first in 1965's AN EVENING WITH BATMAN AND ROBIN-- a re-edited version of the 1943 BATMAN serial-- as well as the 1966-68 teleseries, with its clear chapterplay orientation.  But it should be noted that television cartoons were first to regularly plunder the cinematic serials for their handling of fast-paced thrills, as seen in 1957's RUFF AND REDDY, 1959'S ROCKY AND HIS FRIENDS, 1960's Q.T. HUSH, and 1964's UNDERDOG.
Posted by Gene Phillips at 3:12 PM
Email ThisBlogThis!Share to TwitterShare to FacebookShare to Pinterest
Labels: enthralling hypnotism and illusionism (u), exotic lands and customs (u), freakish flesh (u), the uncanny