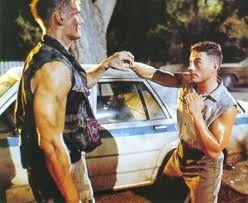 
I would be the last to narrowly define films in terms of their sociopolitical content, and I despise the sort of cant-filled reviews that ignore the kinetic appeal of films to emphasize such content.

That said, in my re-viewing of UNIVERSAL SOLDIER I couldn't help but notice how thoroughly the script papered over any political undercurrents here, given that the protagonist and his antagonist are both survivors of the Vietnam War.  The political nature of that conflict does exert a shaping influence over this hard-hitting action-flick, if only in that the villain can be read as "Bad Soldier Whose Lack of Discipline Leads to Slaughter" while the hero suggests "Good Soldier Who Could Never Be Responsible for Atrocities."

Admittedly, SOLDIER is not about the lives of real soldiers, much less the particulars of Vietnam.  The film's principal concern is that of resuscitating two diametically opposed warriors from the past and pitting them against one another as back-from-the-dead super-soldiers.  Still, there is a mythic juxtaposition here between the hero, who only wants to return home a la John Rambo and forget his part in the armed conflict, and the villain, who has become entirely obsessed with war.

The shadow of real-life military war criminal William Calley hangs heavy upon the "origin" of these two Universal Soldiers, a.k.a. "Unisols."  While serving in Vietnam, private Luc Devereaux (Jean-Claude Van Damme) is shocked when his commanding sergeant Andrew Scott (Dolph Lundgren) goes berserk and slaughters not only local Vietnamese but many of his own unit.  It's not clear why Scott-- who has formed an extreme persecution complex, regarding all those around him as traitors-- doesn't immediately shoot Devereaux when he sees him, except that the script needs to depict what a crazy he is.  When the sergeant orders the private to kill a prisoner, the result is a standoff in which both men are killed-- temporarily.

However, a rogue government operation takes possession of the bodies.  Almost twenty years later the two soldiers have been restored to life, so that their training can be combined with chemicals that enhance their strength and healing abilities.  The ramrod of the operation (Ed O'Ross) plans to use their "super-soldiers" in future conflicts, if the scientists can just solve the problem that the two walking-dead warriors must be continually cooled down to avoid burnout.

However, old memories die hard.  During a combat-situation Scott once more goes out of control, and Devereaux's attempt to stop him triggers some partial memories of his real identity.  A lady reporter spirits the good warrior away from the military.  The army's pursuit of Devereaux is hampered when Scott uses his enhanced abilities to take over the operation.

Though the memories of both Unisols remains hazy, Van Damme's character is largely benign, fighting back only when threatened.  Lundgren's Scott gets the best lines, as he dwells in the fantasy that he's still fighting the war.  His standout scene-- in terms of drama-- is one in which he and his fellow Unisols lay siege to a supermarket and haraunge the confused citizens who, as far as Scott is concerned, merely sat out the war while he and his men did the fighting.

Van Damme's clumsy attempts to rediscover his part are never very affecting, both because of Van Damme's limited acting abilities and the script's shortcomings.  Then again, dramatic tension is not the movie's purpose.  The middle of the film merely marks time in order to set up the expected combat at the conclusion.  And in this SOLDIER does not disappoint.  Though Lundgren does not attempt sophisticated martial arts moves, he pits his sheer size and brutality against Van Damme's high-kicking arts, making for one of the more intense one-on-one battles of the 1990s.

Again, the sociological themes in SOLDIER are just a backdrop to the Big Fight, so it's not fair to assail them for their spotty development.  Still, the mere fact that the filmmakers evoked Vietnam-- rather than some banana-republic conflict-- shows that they were aware that even twenty years later, the Vietnam War had considerable power to call up old ghosts.

Posted by Gene Phillips at 3:40 PM
Email ThisBlogThis!Share to TwitterShare to FacebookShare to Pinterest
Labels: combative adventures, the marvelous