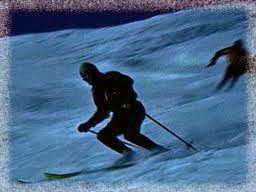 
Though some critics consider Fleming's OHMSS one of his best novels, in my re-reading I found that it suffered from weak pacing and motivations.  The novel is famous as the one in which James Bond marries for the first and only time, but he weds neurotic Tracy di Vicenzo, one of Fleming's least interesting heroines.

OHMSS also presents the return of Blofeld after his introduction in THUNDERBALL, but it's hard to top a crime as daring as heisting atomic bombs.  This time Blofeld poses as a phony European count and takes up residence in a castle in the Swiss Alps.  He creates for himself the reputation of a great allergy doctor, and he invites several allergy-afflicted Englishwomen to his lair on the pretence of curing them.  His real intent is to program them subliminally so that they will carry bacterial agents back to England-- sort of like a cross between a beauty pageant and the Trojan Horse (no pun intended)-- and infect England's agriculture and livestock industries.  Bond presumes that Blofeld is funded by the Russians, though this is never verified.  Bond is placed on Blofeld's trail by the father of Tracy, Marc-Ange, head of the Corsican equivalent of the Mafia, and 007's only way into the villain's fortress is to pose as an expert on heraldry.  It seems criminal mastermind Blofeld is bitten by the snob-bug, desiring to have an English firm authenticate his phony nobility. Fleming never makes this transition convincing, but he does have some fun with the pretensions of commoners. However, that bit of fun doesn't compensate for the novel's padding with too much information on the science of heraldry.  Bond infiltrates the citadel, learns the evildoer's plans and escapes in the novel's most exciting sequence.  Then, unable to attack Blofeld with conventional forces, Bond gets the help of Marc-Ange in attacking and destroying the Swiss castle.  In the end Bond marries Tracy, but she's killed when vengeful Blofeld makes a machine-gun attack on Bond.

The novel fits well into the uncanny phenomenality thanks to Blofeld's programming techniques, probably owing to then-current beliefs about subliminal programming as expressed in Vance Packard's 1957 book THE HIDDEN PERSUADERS-- not least because 007 actually uses the term "hidden persuader"in the text.

The cinematic OHMSS follows the book very closely, aside from inserting many more fight-scenes-- something Fleming's books rarely emphasize.  Of course OHMSS is famed as the first non-Connery Bond-film, and star George Lazenby has maintained a strong reputation even though he never repeated the role.  Given that Lazenby was not a professional actor, he comes off quite well, though one must credit the producers for helping to mold him into a quasi-Connery to keep the fans happy.  Co-star Diana Rigg infuses the character of Tracy with much more cleverness and strength than the prose character possesses, and in deference to her history from THE AVENGERS, she too gets an extended fight-scene.  Telly Savalas essays my least favorite Blofeld, but his portrayal has its strengths, not the least that he is a much more physical antagonist for Bond.  This proves to be in keeping with the Blofeld who ends up sword-fighting Bond in the novel YOU ONLY LIVE TWICE.

The movie also manages to trump the thrills of Bond's novel-escape with a tour de force of skiing-stunts, improving on Fleming by handicapping Bond with but a single ski.  Later both Bond and Tracy experience a second ski-attack, which serves to get Tracy captured by Blofeld's forces.  This has the additional result of making the attack on the castle more involving.  In one of Rigg's best scenes Tracy manages to keep Blofeld at bay by flattering him with poetry, at least until the climactic attack.  Because the script builds up her character considerably, her death is similarly more affecting than in the novel.

Blofeld's scheme differs only in minor details.  Instead of inviting only English girls for his Trojan Horse treatment, Blofeld brings in young women from many countries.  This change allowed the producers to put the beauties of many nations on display, making for greater international publicity to boot.  No mention of Russian assistance is made, and as a consequence Blofeld isn't out to decimate England right away.  Rather, in a variation of his THUNDERBALL routine, he plans to blackmail the world to keep its resources safe.  This doesn't entirely track, especially since he does so after Bond escapes his clutches and could theoretically warn border-guards about the Trojan babes.  Blofeld gets a mano-a-mano battle with Bond while the two struggle atop a bobsled, which is certainly more exciting than the villain simply slipping away during the attack.

One-time Bondfilm director Peter Hunt-- who had been an editor on all five films previous-- handles the interpersonal scenes quite well.  However, according to one interview Hunt sought to play down some of the more outre aspects of the 007 world.  Thus there are no added gimmicks in the film, and the "hidden persuaders" are the only metaphenomenal aspects of the film, just as they are in the novel.  At times Hunt's passion for realism renders some scenes clunky or overly distanced, lacking the escapist glamor for which the franchise had become known.

Posted by Gene Phillips at 4:43 PM
Email ThisBlogThis!Share to TwitterShare to FacebookShare to Pinterest
Labels: bizarre crimes and crimefighting (u), combative adventures, diabolical devices (u), enthralling hypnotism and illusionism (u), the uncanny