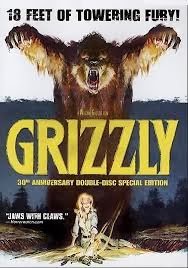 
For every successful film, there are often at least three knockoffs. Usually they don't prosper particularly well, but GRIZZLY is one of the few that did so.  Appearing the year after the major success of Spielberg's JAWS, GRIZZLY-- sometimes released to TV under the name "CLAWS"-- racked up a respectable box office and proved to be the highest grossing effort by genre director William Girdler.

Sad to say, GRIZZLY isn't even a good knockoff, probably because it follows the JAWS template so religiously. There's a massive animal-- here, a fifteen-foot tall bear-- that wanders around a national park, going out its way to kill human beings who are not its normal prey.  There's a park ranger (Christopher George) who's out of his depth in dealing with such a creature, drawn from the Roy Scheider JAWS character.  He seeks help from an expert, a naturalist played by Richard Jaeckel, a dead ringer for the Richard Dreyfuss character.  What Girdler and his writers miss, of course, was the strong element of male bonding between the original ensemble.  George and Jaeckel are capable stars, better than one gets in most JAWS knockoffs, but they can't give any personality to their flat, one-dimensional characters.

The only interesting aspect of GRIZZLY is the fact that the titular bear-menace is not an "astounding animal" in the sense that I used the term for the original JAWS movies.  If it were just a modern-day bear with an uncanny propensity for slaughter, then GRIZZLY would fit into the domain of the uncanny.  However, because of one line in which the naturalist claims that the killer grizzly is actually an unexplained survival of a thought-to-be-extinct Pleistocene species, GRIZZLY falls into the realm of the marvelous. 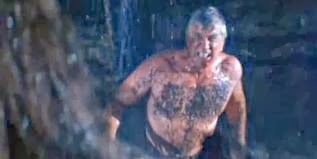 DAY OF THE ANIMALS was Girdler's loose follow-up to GRIZZLY in that it was yet another outdoors flick, and once again starred George and Jaeckel, as well as adding several other well-known actors.  This time humans are menaced by several animal species-- predacious birds, a mountain lion, wolves and a non-prehistoric killer grizzly.  Here it's not the animals that are marvelous.  Rather, it's the thing that brings about their human-killing madness: a solar flare whose baleful radiation is no longer screened out by the ozone layer, thanks to humanity's ecological abuses.

While ANIMALS is first and foremost a wild thriller, the script is consistent in its ecological mini-theme.  The principal characters in danger are a group of hikers on a ramble through a park, led by guides played by Christopher George and Michael Ansara.  Ansara's character is, like many played by the Syrian-born actor, a Native American, and he's inevitably the target of mockery from the group's Racist Butthead, a corporate bigshot named Jenson (Leslie Nielsen).  The theme here may have been that whereas Native Americans were once in touch with the land, while fascist white people just can't see what they've done to the environment.  However, Girdler never lets this thematic potential slow up the action, though to be sure it's pretty clumsily staged action in many cases.

Jenson does defy convention in one respect: instead of being your typical sluggish fat-cat, he's a ripped corporate raider who flouts his own civilized brand of toughness. Jenson never gets into a fight with either of the heroes, but when the animals start attacking, Jenson has enough magnetic charisma to persuade some of the hikers to leave the guides' party, and naturally manages to lead them all into crisis, not to mention temptation.

Few of the characters, heroic or pathetic, are very interesting, so I didn't pay much attention to their fates. Jenson alone is the standout character, for he apparently goes mad from the solar radiation just like the animals.  After leading his loyal allies astray, he decides he ought to take the privileges of the "alpha male" and rape one of the women.  As he does so, a thunderstorm breaks out and a lightning bolt narrowly misses Jenson.  The not-so-fat cat then goes into a religious rant, claiming that he doesn't respect the God of the Bible:

Melville's God, that's the God I believe in! You see what you want you take. You take it! And I am going to do just that!


I can't be certain, but I suspect that this was Girdler invoking a key passage from Melville's MOBY DICK, in which Ahab professes his belief in a fiery god roughly compared to the divinity of the "Parsees," at least as Melville understood said divinity:


Oh, thou clear spirit, of thy fire thou
madest me, and like a true child of fire, I breathe it back to thee.


Then, before Jenson can do the deed, a new agent of God-- or maybe of offended nature-- comes on the scene: the aforementioned grizzly. While the other hikers run away, nutzoid Jenson tries to fight the bear, and that ends his brief blasphemous career.

Unfortunately, once Jenson is dead, the film has nowhere to go, except to show more victims either being picked off or finding temporary safety.  In the end the solar-flare effect wears off and the maddened animals are exterminated by the authorities.

One last comment: I've seen a lot of reviews mock Leslie Nielsen for being "hammy."  I concede that it's almost impossible to see Nielsen as a serious actor after his post-AIRPLANE comedy-roles.  But though I'm not claiming that Nielsen's perfomance as Jenson is a classic to last the ages, it's not merely "hammy," either.  I think Nielsen took an over-the-top role and brought as much conviction to it as anyone could.  That, at least, is not my definition of a "ham actor."


Posted by Gene Phillips at 2:21 PM
Email ThisBlogThis!Share to TwitterShare to FacebookShare to Pinterest
Labels: the marvelous