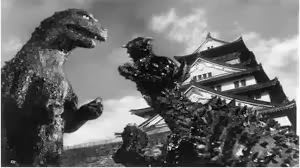 
I suppose I could have waited to review GODZILLA RAIDS AGAIN until I got my hands on the DVD set that shows the original Japanese version of RAIDS as well as the Americanized version, as I did with the original 1954 film.  However, critical consensus seems to be that RAIDS was a quickie sequel executed by a lesser talent at Toho Studios, while one of the men most associated with GODZILLA's breakout success, director Ishiro Honda, was assigned to some other project.  For that reason, and because I was impatient to compare the sequel to the original-- even in a somewhat compromised form-- I decided to simply review the American version here.

I found that though the absence of Honda and a sufficient budget made a sizeable difference in the essentials of RAIDS, there are interesting points of continuity between the first two iterations of Godzilla.  Despite the necessity of creating a "new Godzilla" after the old one was skeletonized, the script for RAIDS remains generally consistent with the concept of the first film, possibly because at least one of GODZILLA's credited writers, Takeo Murata, contributed to the RAIDS script.  And of course effects artist Eiji Tsuburaya's work is largely uncompromised in the Americanized film, which is more than one can say of the original film's musical score.  Perhaps the best way to describe the difference between the two films is to say that while GODZILLA was a response to and amplification of the content and themes in 1953's BEAST FROM 20.000 FATHOMS, RAIDS is more of a response to 1933's KING KONG.


In my review of KING KONG I observed:

Kong is the character toward whom everyone else looks, while he himself sees only Ann. He is, as Denham says, a "god in his world," and he maintains his godhood through his unstinting superiority in combat. Prior to the great ape's being taken prisoner through human trickery, we see Kong battle and vanquish three prehistoric enemies: a tyrannosaurs, an elasmosaurus, and a pteranodon.


To be sure, the film begins very differently from KING KONG, centering not on a band of explorers looking for exotic animals to film, but on two "fish spotters," Tsukioka and Kobayashi, whose job is to track the movements of tuna schools at sea.  Mechanical failure causes Kobayashi to land his plane on a remote island, and Tsukioka lands there as well to render aid.  No sooner have the men come together than they see two titanic creatures battling on the island.  These are another Godzilla-- dubbed "Gigantis" in the American version-- and Anguirus, a new beast based roughly on the authentic prehistoric creature, the Ankylosaurus.  The two pilots flee for their lives, becoming the heralds of the warring titans to humanity.

The broad implication of the American film is that these two creatures have been awakened from centuries-long hibernation by atomic testing, just as in the case of GODZILLA.  What seems less obvious is the question as to why the reborn creatures are fighting.  In 1933's KING KONG, Kong fights with various monsters who are seeking to eat Ann Darrow.  With what we are given, one can only assume that the new Godzilla and Angurius had been competitors for territory in ancient times, and that upon being revived, they simply renew some earlier battle as if there had been no interruption.

The contending monsters plummet into the sea, causing them to become separated, though both of them proceed roughly in the direction of the city of Osaka on the Japanese island Honshu.  Doctor Yamane from the first film appears briefly to recap the history of the first Godzilla's rampage, as well as the fact that the weapon that slew him is no longer available.  There is a curious attempt in this film to equate both monsters with a primeval "fiery past" of the Earth's history, an equivalence which will become providential at the film's conclusion.

Strangely, as if to mirror similar scenes in the first film, we see residents of Osaka celebrating the fact that the monsters haven't attacked long before they should credibly believe themselves safe. Perhaps the scripter and director wanted to conjure once more with the image of Godzilla as an ancestral dragon sent to chastise modern Japan.  Godzilla finds his way to the shores near Osaka, but the military-- once again treating Godzilla as if he were an enemy invader-- distracts him by shooting flares toward the ocean.  However, an incident involving convicts escaping their imprisonment brings about a large fire, so that Godzilla returns to Osaka, roughly about the same time Anguirus arrives.

One immense benefit of the battle between the two creatures is that their conflict distracts from the audience's expectations of seeing Osaka ravaged as Tokyo was in the first film.  That said, their conflict also has some of the same ego-boosting effect seen in KING KONG: when Godzilla triumphs over the formidable Anguirus, he proves that he is "top lizard" much as Kong did in defeating various dinosaurs.  Thus Anguirus is in some sense a stand-in for Osaka: the extended-- and exciting-- wrestling match of the two colossi takes the place of a more expensive general destruction of the city.  Though this maneuver may have had its roots in economics, the "monster duel" would become one of the central tropes of the Godzilla franchise, becoming far more important than the trope was in the original KONG or in most of its recapitulations.

The army expends its usual might against Godzilla, to no effect, though the Big G does proceed back out to sea, ending up on an island covered with ice.  To solve the dilemna of his presence, the film happily avoids bringing in yet another miracle-working scientist.  Instead, Tsukioka's somewhat comical pal Kobayashi nobly sacrifices his life divebombing Godzilla kamikaze-style.  Kobayashi's heroic act gives Tsukioka an inspiration: if the army shells the icy cliffs surrounding Godzilla, they can bury him in ice.  The military follows Tsukioka's plan, and Godzilla is duly entombed.  In addition to duplicating the natural processes that plunged both Godzilla and Anguirus into hibernaiton, there may be some sense that "fire monster" Godzilla has an antipathy to the cold and loses power in its vicinity.

The human characters in this film are somewhat one-dimensional and are in no way as compelling as Serizawa, his fiancee and his young competitor from the first film, though I presume that RAIDS' characters were somewhat better presented in the Japanese original.  Interestingly, though RAIDS' box office was so disappointing that the studio did not make another Godzilla film until 1962, that film followed the template of RAIDS far more than the original GODZILLA as well, in that it centered around another "monster duel," albeit one brought about by meddling humans.  This was of course KING KONG VS. GODZILLA, whose popularity revolutionized the Godzilla franchise.  It might be said, then, that GODZILLA RAIDS AGAIN offered a more practical pattern for imitation than the original, by its singular nature, could have.

Posted by Gene Phillips at 3:51 PM
Email ThisBlogThis!Share to TwitterShare to FacebookShare to Pinterest
Labels: combative dramas, the marvelous