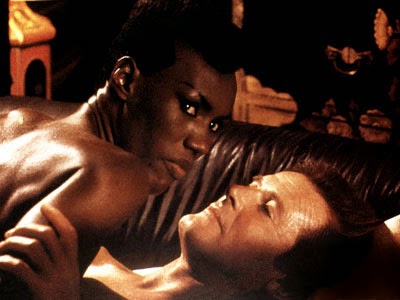 A VIEW TO A KILL was the last Bond film for both Roger Moore as 007 and Lois Maxwell as Moneypenny. It was also a "first" in that it borrowed nothing I can see from its supposed source material, Ian Fleming's short Bond story "From a View to a Kill." Wikipedia asserts that THE SPY WHO LOVED ME, MOONRAKER, and OCTOPUSSY were all original screenplays, but it's at least possible to descry elements borrowed from the Fleming originals, even if they were very minor, as when a hood with steel-capped teeth in the novel SPY WHO LOVED ME was reconfigured  into "Jaws."

Though VIEW was scripted by frequent Bond-writers Richard Maibaum and Michael G. Wilson, the film's scenario picks up on the Third Reich's "quest for genetic perfection" theme seen in Christopher Wood's MOONRAKER. VIEW opens with a good-but-not-great ski-pursuit "teaser," in which Bond must flee Russian pursuers before finding his way into the arms of a luscious female contact. For once, the teaser does play into the main plotline, for Bond has learned that the Russians have acquired a microchip identical to one manufactured by Great Britain: a microchip designed to resist the threat of magnetic pulse technology. This suggests that the European manufacturer of the chip, Zorin Industries, may be in bed with the USSR.

Bond must investigate the company and its eponymous leader, Max Zorin (Christopher Walken). Zorin happens to come to England to race one of his horses at Ascot, so that Bond and his MI-6 associate Tibbett (Patrick MacNee) observe both the industrialist and his striking female bodyguard, May Day (Grace Jones). Tibbett comments that it's unusual that Zorin has enjoyed great success with equine bloodlines thought to be inferior by experts. There's a slight resonance here with the novel MOONRAKER, in that the hero is put on the trail of a beneficent industrialist simply because of the anomaly that the man cheats at cards.

Though the horse-breeding plot-line seems wildly unrelated to the matter of microchips, Bond follows this line of inquiry all the way to France, the location of Zorin Industries. Bond contacts a French detective for information on Zorin. Though the detective doesn't seem to have much in the way of leads, he's assassinated, in a very public manner, by May Day. Bond pursues May Day all the way up the Eiffel Tower but fails to corral her. She escapes in a speedboat with none other than Zorin himself.

Though I don't generally care to pick apart the plot of escapist films, this sequence is pretty egregious. Not only is the detective killed for dubious reasons and in public, he's killed by a person who, if identified, would have brought down unwanted inquiry on Zorin-- the more so, if she was seen escaping in Zorin's company. Was France hard up from professional killers at the time? Of course I know the writers devised this sequence as another "teaser" for the major conflict to come. Yet I also had trouble with the idea that Bond, after having given pursuit to the assassin, would simply continue with his investigation. as if there was no chance that May Day would remember his face-- which she doesn't, until it's too late to do her and Zorin any good.

Thanks to May Day's poor memory, Bond is able to infiltrate one of Zorin's gatherings, where he meets two significant persons. One is Stacey Sutton, a woman with a grudge against Zorin, and the "Bond girl" this time round. The other is Carl Mortner, the physician in charge of caring for Zorin's "inferior" horses. The fact that he's a German talking about breeding superior strains from inferior ones ought to send up some flags, and sure enough, later it's revealed that he's an ex-Nazi scientist.

A connection between racecourses and microchips becomes clear when Bond and Tibbett learn that Mortner has found a way to secretly inject steroids into Zorin's race-horses using timed microchip technology. However, the discovery costs Tibbett's life, while Bond, exposed as a spy, escapes another death-trap.

Bond's researches into Zorin and Mortner's backgrounds turn up information that is also communicated when Communist general Gogol pays a visit to Zorin. It turns out that during WWII Mortner experimented on concentration-camp victims in an effort to make them into supermen, and that Zorin is one of the few experiments that survived, though he was taken over and financed by the Russians in order to provide them with desired intel.I should remark that no Nazi scientist ever would have been seeking to use camp-victims for anything but as a means of discovering medical info that might help German soldiers in the field; certainly, no Nazi would conceive that "inferior breeds" could somehow be made superior through technology.  Still, if the idea fails every logical test, it does serve to explain why Zorin is such a nutbar, and why he's broken away from Russian control. Eventually Bond will learn, partly with the help of Stacey Sutton, that Zorin wants to create the most hostile of all takeovers, by flooding the San Andreas Fault and destroying the seat of American pre-eminence in microchip tech: Silicon Valley. While as a business plan this doesn't make a lot of sense, the scheme carries the same "daring supercriminal" vibe seen in Fleming's THUNDERBALL and GOLDFINGER. Thanks to Bond's interference, Zorin ends up double-crossing May Day for reasons of expedience, and she aids Bond in foiling the scheme. Bond then takes on Zorin directly in a well-staged battle taking place jointly on Zorin's dirigible and the Golden Gate Bridge.

There are a lot of flaws in this screenplay, but there are a few more moments of genuine emotion than one sees in a lot of Bond-films from this period. After Bond saves Stacey from thugs, he doesn't do the expected thing; instead of trying to bed the beleaguered girl, he allows her to go to bed alone (though of course they hook up in the end). During a scene wherein Zorin floods a tunnel and thus kills all of his own henchmen, May Day gets an anguished moment when she sees the dead body of a friend floating in the water. I wish the producers had eighty-sixed the time-wasting fire-truck sequence, but I've certainly seen worse sequences in the Bond corpus.

Mortner's "superman" experiments don't work out, but they do edge this thriller firmly into the domain of the marvelous. And though VIEW doesn't have the best script, even for the Moore Bonds, it does have one of the best song-montages, despite the fact that Duran Duran's lyrics don't make a helluva lot of sense.